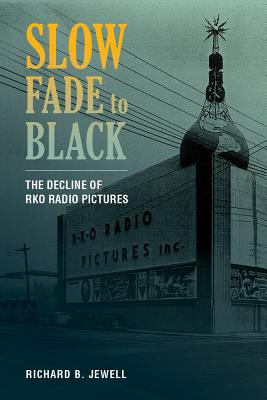 The Decline of RKO Radio Pictures

Slow Fade to Black completes Richard B. Jewell’s richly detailed two-part history of the RKO film studio, which began with RKO Radio Pictures: A Titan Is Born, published in 2012. This second volume charts the studio’s fortunes, which peaked during World War II, declined in the postwar period, and finally collapsed in the 1950s. Drawing on hard-to-access archival materials, Jewell chronicles the period from 1942 to the company’s demise in 1957. Towering figures associated with the studio included Howard Hughes, Orson Welles, Charles Koerner, Val Lewton, Jane Russell, and Robert Mitchum. In addition to featuring an extraordinary cast of characters, the RKO story describes key aspects of entertainment history: Hollywood’s collaboration with Washington, film noir, censorship, HUAC, the rise of independent film production, and the impact of television on film. Taken as a whole, Jewell’s two-volume study represents the most substantial and insightful exploration of the Hollywood studio system to date.

Praise For Slow Fade to Black: The Decline of RKO Radio Pictures…

"Jewell’s scholarship is impeccable and his text is plain-spoken and highly readable. Every studio deserves a similar examination; thank goodness the right man tackled this particular task."
— Leonard Maltin

Richard B. Jewell is Hugh M. Hefner Professor of Cinema and Media Studies at the USC School of Cinematic Arts. He is author of The Golden Age of Hollywood and The RKO Story, among other works, as well as coauthor of Primary Cinema Resources. In 2008, he was named Academy Film Scholar by the Academy of Motion Picture Arts and Sciences.
Loading...
or support indie stores by buying on