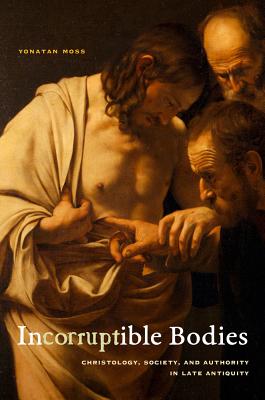 In the early sixth-century eastern Roman empire, anti-Chalcedonian leaders Severus of Antioch and Julian of Halicarnassus debated the nature of Jesus's body: Was it corruptible prior to its resurrection from the dead? Viewing the controversy in light of late antiquity’s multiple images of the ‘body of Christ,’ Yonatan Moss reveals the underlying political, ritual, and cultural stakes and the long-lasting effects of this fateful theological debate. Incorruptible Bodies combines sophisticated historical methods with philological rigor and theological precision, bringing to light an important chapter in the history of Christianity.

"This is an important book on patristic Christology, given Moss's methodological care, his modesty about his conclusions, and his exploration of less commonly used Syriac and Coptic sources... Recommended."
— CHOICE

"Incorruptible Bodies represents the best aspects of many streams in the study of late ancient Christianity."
— Reading Religion

"An intelligent and comprehensive approach to the ecclesial perception of Christ’s body, in the three facets discussed above, conveying something fundamental about the multilayered construct of the body in the early Christian centuries."
— Journal of Religious History

"Moss’s detailed analysis of exiled anti-Chalcedonians has furnished us with a new key to the late antique understanding of authority."
— Book Notes

"This brilliant monograph by Yonatan Moss is not only a fine study of Severus of Antioch, the greatest of the theological critics of Chalcedon, but in a bold and rather remarkable way offers a convincing account of wider aspects of the confusing landscape in the first half of the sixth century."
— Church History and Religious Culture

"This is a learned, bold and entirely constructive study of the sixth century. It builds on the foundation of an earlier generation which concentrated on close studies, and in a way that deserves much credit it now obliges us to reread texts that we thought we had understood."
— Ecclesiology

"Provides us with a new key to Severus of Antioch as a theologian and as a church politician. . . . extremely useful, learned and innovative book."
— Journal of Ecclesiastical History

Yonatan Moss is a scholar at the Martin Buber Society of Fellows at the Hebrew University of Jerusalem where he teaches in the Department of Comparative Religion.
Loading...
or support indie stores by buying on