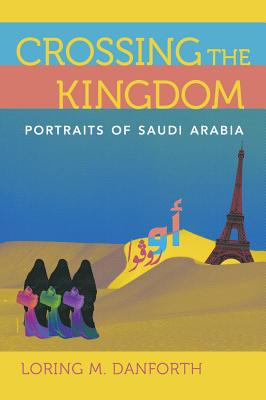 For many people, the Kingdom of Saudi Arabia evokes images of deserts, camels, and oil, along with rich sheikh in white robes, oppressed women in black veils, and terrorists. But when Loring Danforth traveled through the country in 2012, he found a world much more complex and inspiring than he could have ever imagined.

With vivid descriptions and moving personal narratives, Danforth takes us across the Kingdom, from the headquarters of Saudi Aramco, the country’s national oil company on the Persian Gulf, to the centuries-old city of Jeddah on the Red Sea coast with its population of undocumented immigrants from all over the Muslim world. He presents detailed portraits of a young woman jailed for protesting the ban on women driving, a Sufi scholar encouraging Muslims and Christians to struggle together with love to know God, and an artist citing the Quran and using metal gears and chains to celebrate the diversity of the pilgrims who come to Mecca.


Crossing the Kingdom paints a lucid portrait of contemporary Saudi culture and the lives of individuals, who like us all grapple with modernity at the dawn of the twenty-first century.


Praise For Crossing the Kingdom: Portraits of Saudi Arabia…

"A travelogue that is more sophisticated than the perspectives that dominate Western media reporting on the kingdom."
— Times Literary Supplement

"Danforth provides a superb anthropological analysis of the cultural problems the Saudi state has become entangled in."
— The Middle East Journal

Loring M. Danforth is Professor of Anthropology at Bates College. He is the author of The Death Rituals of Rural Greece, Firewalking and Religious Healing, The Macedonian Conflict: Ethnic Nationalism in a Transnational World, and Children of the Greek Civil War: Refugees and the Politics of Memory.
Loading...
or support indie stores by buying on