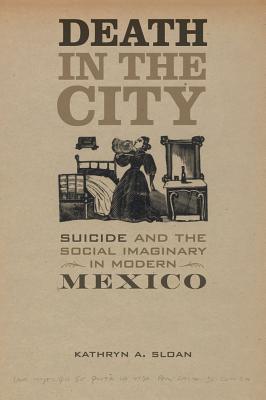 Death in the City

At the turn of the twentieth century, many observers considered suicide to be a worldwide social problem that had reached epidemic proportions. In Mexico City, violent deaths in public spaces were commonplace in a city undergoing rapid modernization. Crime rates mounted, corpses piled up in the morgue, and the media reported on sensational cases of murder and suicide. More troublesome still, a compelling death wish appeared to grip women and youth. Drawing on a range of sources from judicial records to the popular press, Death in the City investigates the cultural meanings of self-destruction in modern Mexico. The author examines responses to suicide and death and disproves the long-held belief that Mexicans possess a cavalier attitude toward suffering.

Praise For Death in the City: Suicide and the Social Imaginary in Modern Mexico (Violence in Latin American History #5)…

"Thorough, well researched, methodologically appealing, and with a clear narrative line... an excellent addition to the literature on death and crime in Mexico City and an obligatory reference for scholars interested in comparative analyses across regions"
— H-Net

Sloan offers us a sharp portrait of how some early-twentieth-century urban Mexicans debated social change and pondered a profoundly gendered realm of suicide.... [Her] coherent structure and clear prose make it suitable for students as well as specialists.
— American Historical Review

Kathryn A. Sloan is Associate Dean of Fine Arts and Humanities in the J. William Fulbright College of Arts and Sciences at the University of Arkansas. She is the author of Runaway Daughters: Seduction, Elopement, and Honor in Nineteenth-Century Mexico and Women’s Roles in Latin America and the Caribbean.
Loading...
or support indie stores by buying on