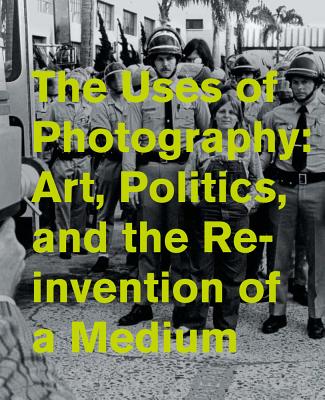 The Uses of Photography

Art, Politics, and the Reinvention of a Medium

The Uses of Photography examines a network of artists who were active in Southern California between the late 1960s and early 1980s and whose experiments with photography opened the medium to a profusion of new strategies and subjects. These artists introduced urgent social issues and themes of everyday life into the seemingly neutral territory of conceptual art, through photographic works that took on hybrid forms, from books and postcards to video and text-and-image installations. Tracing a crucial history of photoconceptual practice, The Uses of Photography focuses on an artistic community that formed in and around the young University of California San Diego, founded in 1960, and its visual arts department, founded in 1967. Artists such as Eleanor Antin, Allan Kaprow, Fred Lonidier, Martha Rosler, Allan Sekula, and Carrie Mae Weems employed photography and its expanded forms as a means to dismantle modernist autonomy, to contest notions of photographic truth, and to engage in political critique. The work of these artists shaped emergent accounts of postmodernism in the visual arts and their influence is felt throughout the global contemporary art world today.

Published in association with the Museum of Contemporary Art San Diego.

Praise For The Uses of Photography: Art, Politics, and the Reinvention of a Medium…

"This is a valuable introduction to the work of these individuals and, beyond that, a reasoned assessment of the nature and qualities of this aspect of an important art movement. . . Summing Up: Highly recommended."
— CHOICE

Jill Dawsey is Curator at the Museum of Contemporary Art San Diego. Prior to joining MCASD, she held curatorial posts at the San Francisco Museum of Modern Art and the Utah Museum of Fine Arts. Dawsey’s recent exhibitions include Laugh-in: Art, Comedy, Performance (2015), Approximately Infinite Universe (2014), and The Smithson Effect (2011, for the UMFA). She received her PhD in art history from Stanford University and holds a BA from Bryn Mawr College.
Loading...
or support indie stores by buying on