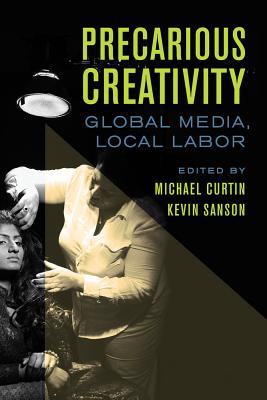 Precarious Creativity examines the seismic changes confronting media workers in an age of globalization and corporate conglomeration. This pathbreaking anthology peeks behind the hype and supposed glamor of screen media industries to reveal the intensifying pressures and challenges confronting actors, editors, electricians, and others. The authors take on pressing conceptual and methodological issues while also providing insightful case studies of workplace dynamics regarding creativity, collaboration, exploitation, and cultural difference. Furthermore, it examines working conditions and organizing efforts on all six continents, offering broad-ranging and comprehensive analysis of contemporary screen media labor in such places as Lagos, Prague, Hollywood, and Hyderabad. The collection also examines labor conditions across a range of job categories that includes, for example, visual effects, production services, and adult entertainment. With contributions from such leading scholars as John Caldwell, Vicki Mayer, Herman Gray, and Tejaswini Ganti, Precarious Creativity offers timely critiques of media globalization while also intervening in broader debates about labor, creativity, and precarity.

“The current volume is overdue, because it not only assumes the rise of the worldwide precariat, but it also scrutinizes vastly different cultural practices, many of which have not received critical attention in any depth…. Readers of this volume will nonetheless encounter stimulating rehearsals of these new modes of creative precarity.”
— Labor: Studies in Working-Class History

Michael Curtin is the Duncan and Suzanne Mellichamp Professor of Global Studies in the Department of Film and Media Studies and cofounder of the Media Industries Project at the University of California, Santa Barbara. His previous books include The American Television Industry; Reorienting Global Communication: Indian and Chinese Media Beyond Borders; Playing to the World’s Biggest Audience: The Globalization of Chinese Film and TV; and Distribution Revolution: Conversations about the Digitial Future of Film and Television.

Kevin Sanson is a Lecturer in Entertainment Industries at Queensland University of Technology in Australia. He is coeditor of Distribution Revolution: Conversations about the Digital Future of Film and Television and Connected Viewing: Selling, Streaming, & Sharing Media in the Digital Era and is part of the founding editorial collective of Media Industries, the first peer-reviewed open-access journal for media industries research.