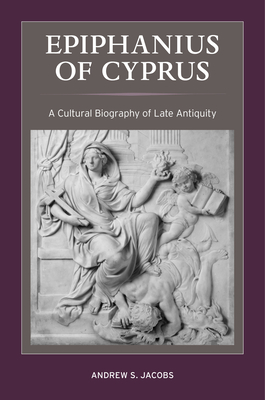 Epiphanius, Bishop of Constantia on Cyprus from 367 to 403 C.E., was incredibly influential in the last decades of the fourth century. Whereas his major surviving text (the Panarion, an encyclopedia of heresies) is studied for lost sources, Epiphanius himself is often dismissed as an anti-intellectual eccentric, a marginal figure of late antiquity. In this book, Andrew Jacobs moves Epiphanius from the margin back toward the center and proposes we view major cultural themes of late antiquity in a new light altogether. Through an examination of the key cultural concepts of celebrity, conversion, discipline, scripture, and salvation, Jacobs shifts our understanding of "late antiquity" from a transformational period open to new ideas and peoples toward a Christian Empire that posited a troubling, but ever-present, "otherness" at the center of its cultural production.

"A creative, valuable contribution to scholarship on Epiphanius particularly, and fourth-century Christianity generally. Jacobs’s 'cultural biography' idea is noteworthy, and while his bridge between Epiphanius and his culture could be more explicit, this volume manageably realizes that method. Good scholarship merits critical scrutiny, but this reviewer wholeheartedly recommends this book—ingenious, analytic, and readable—to today’s generation of ancient Christian scholars."
— Reading Religion

"This is a well-written and well-argued book which all scholars of Late Antiquity and Early Christianity can read with benefit."
— Studies in Late Antiquity

"Jacobs offers a theoretically sophisticated cultural biography that places this maligned figure at the center of late antiquity rather than (comfortably) at its margins."
— Church History

"In his study of the fourth-century bishop and ascetic Epiphanius, Andrew Jacobs makes another illuminating intervention into the history of ancient Christianity. . . . Exemplary and brilliant."
— Bryn Mawr Classic Review

Andrew S. Jacobs is Professor of Religious Studies and Mary W. and J. Stanley Johnson Professor of Humanities at Scripps College in Claremont, California. He is the author of Remains of the Jews: The Holy Land and Christian Empire in Late Antiquity and Christ Circumcised: A Study in Early Christian History and Difference.