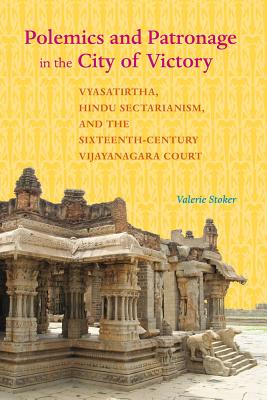 Polemics and Patronage in the City of Victory

Vyasatirtha, Hindu Sectarianism, and the Sixteenth-Century Vijayanagara Court (South Asia Across the Disciplines)

A free ebook version of this title is available through Luminos, University of California Press’s Open Access publishing program for monographs. Visit www.luminosoa.org to learn more.

How did the patronage activities of India’s Vijayanagara Empire (c. 1346–1565) influence Hindu sectarian identities? Although the empire has been commonly viewed as a Hindu bulwark against Islamic incursion from the north or as a religiously ecumenical state, Valerie Stoker argues that the Vijayanagara court was selective in its patronage of religious institutions. To understand the dynamic interaction between religious and royal institutions in this period, she focuses on the career of the Hindu intellectual and monastic leader Vyasatirtha. An agent of the state and a powerful religious authority, Vyasatirtha played an important role in expanding the empire’s economic and social networks. By examining his polemics against rival sects in the context of his work for the empire, Stoker provides a remarkably nuanced picture of the relationship between religious identity and sociopolitical reality under Vijayanagara rule.


Praise For Polemics and Patronage in the City of Victory: Vyasatirtha, Hindu Sectarianism, and the Sixteenth-Century Vijayanagara Court (South Asia Across the Disciplines)…

"A piece of unquestioned expertise. It brings a fresh picture of the statecraft of the Vijayanagara empire—a most puzzling, cosmopolitan South Asian polity—at the peak of its career in the early 16th century. . . . This not only historically but also theoretically informed book is a must-read for those interested in Vijayanagara history or polemics between Dvaita and Advaita schools. It is also an important read for all those sensitive to the problem of finding an appealing language to effectively represent the mutual interdependence of sociopolitical realities, intellectual production and historical thinking."
— Reading Religion

Valerie Stoker is Associate Professor of South Asian Religions and Director of the Master of Humanities Program at Wright State University in Dayton, Ohio.
Loading...
or support indie stores by buying on