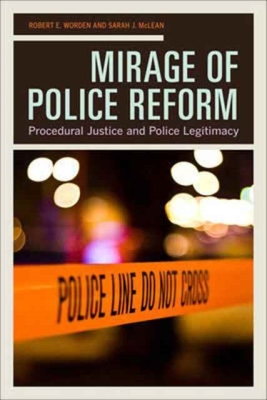 In the United States, the exercise of police authority—and the public’s trust that police authority is used properly—is a recurring concern. Contemporary prescriptions for police reform hold that the public would better trust the police and feel a greater obligation to comply and cooperate if police-citizen interactions were marked by higher levels of procedural justice by police.

In this book, Robert E. Worden and Sarah J. McLean argue that the procedural justice model of reform is a mirage. From a distance, procedural justice seemingly offers a relief from strained police-community relations. But a closer look at police organizations and police-citizen interactions shows that the relief offered by such reform is, in fact, illusory.

"Mirage of Police Reform, by Worden and McLean, is a fresh and timely look at procedural justice, police legitimacy, and community trust... in a very significant way, [it moves] the discussion forward on police and community expectations in still volatile times."
— International Criminal Justice Review

"A vital addition to the literature."
— Contemporary Sociology

"This research is an exemplary demonstration of not only the power of what Morris Janowitz called the “engineering model” of social science research . . . but also of its limitations. Worden and McLean’s findings, some of them surprising, indicate why the procedural justice reform cannot make much difference."
— American Journal of Sociology

Robert E. Worden is Director of the John F. Finn Institute for Public Safety and Associate Professor of Criminal Justice at the University at Albany, SUNY.

Sarah J. McLean is Associate Director and Director of Research and Technical Assistance at the John F. Finn Institute for Public Safety.