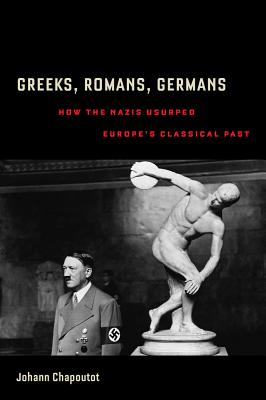 How the Nazis Usurped Europe's Classical Past

Much has been written about the conditions that made possible Hitler's rise and the Nazi takeover of Germany, but when we tell the story of the National Socialist Party, should we not also speak of Julius Caesar and Pericles? Greeks, Romans, Germans argues that to fully understand the racist, violent end of the Nazi regime, we must examine its appropriation of the heroes and lessons of the ancient world. When Hitler told the assembled masses that they were a people with no past, he meant that they had no past following their humiliation in World War I of which to be proud. The Nazis' constant use of classical antiquity—in official speeches, film, state architecture, the press, and state-sponsored festivities—conferred on them the prestige and heritage of Greece and Rome that the modern German people so desperately needed. At the same time, the lessons of antiquity served as a warning: Greece and Rome fell because they were incapable of protecting the purity of their blood against mixing and infiltration. To regain their rightful place in the world, the Nazis had to make all-out war on Germany's enemies, within and without.

Johann Chapoutot is Professor at the Sorbonne, where he teaches contemporary history.


Praise For Greeks, Romans, Germans: How the Nazis Usurped Europe's Classical Past…

"Chapoutot brings together the cultural, ideological and historical threads between the Third Reich and the ancient past, as they were woven by Nazi thinkers . . . this is an ambitious, important book for any scholar working on Nazi ideology, precisely because of its synthetic power."
— Journal of Contemporary History
or support indie stores by buying on
Copyright © 2020 American Booksellers Association