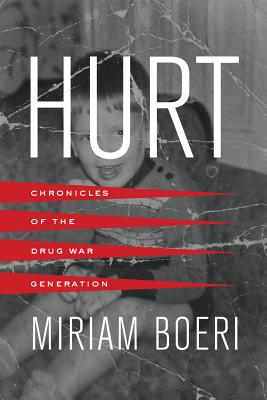 Chronicles of the Drug War Generation

Hurt: Chronicles of the Drug War Generation weaves engaging first-person accounts of the lives of baby boomer drug users, including author Miriam Boeri’s first-hand knowledge as the sister of a heroin addict. The compelling stories are set in historical context, from the cultural influence of sex, drugs, and rock 'n' roll to contemporary discourse that pegs drug addiction as a disease punishable by incarceration. With penetrating insight and conscientious attention to the intersectionality of race, gender, and class, Boeri reveals the impact of an increasingly punitive War on Drugs on a hurting generation.

Praise For Hurt: Chronicles of the Drug War Generation…

"While it is too late to prevent the myriad tragedies experienced by the 'drug war generation,' Hurt respectfully draws on such experiences to make important contributions to drug research, including an intriguing alternate framework for rebuilding once the war is done. In doing so, Hurt presents a fresh take on a continually pressing issue, and should be of broad interest to researchers, students, policymakers, and beyond."
— Social Forces

"Sociologist Boeri lifts back the curtain on some of the more unseen aspects of drug use and abuse. ... This enlightening, well-written text will be an appreciated addition to any library collection, especially those supporting sociology, history, or criminology and criminal justice programs. ... Highly recommended."
— Choice

"Hurt challenges many assumptions about substance use, substance use disorders, and the people who use and sometimes misuse alcohol and other drugs. ... Criticisms of the War on Drugs and its consequences abound. Works such as Boeri’s that document the specific impact at the level of the individual are less common. Far from reducing the harms associated with problematic or chaotic drug use, the strategies of the War on Drugs are themselves a source of harm, diverting resources and undermining ties to people and social institutions that make change and self-actualization possible, even likely. This finding, which Boeri makes explicitly clear, is arguably the book’s greatest contribution."
— Contemporary Sociology

Miriam Boeri is Associate Professor of Sociology at Bentley University. She is the author of Women on Ice: Methamphetamine Use among Suburban Women.