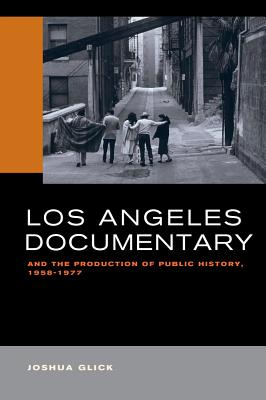 Los Angeles Documentary and the Production of Public History, 1958-1977

Los Angeles Documentary and the Production of Public History, 1958–1977 explores how documentarians working between the election of John F. Kennedy and the Bicentennial created conflicting visions of the recent and more distant American past. Drawing on a wide range of primary documents, Joshua Glick analyzes the films of Hollywood documentarians such as David Wolper and Mel Stuart, along with lesser-known independents and activists such as Kent Mackenzie, Lynne Littman, and Jesús Salvador Treviño. While the former group reinvigorated a Cold War cultural liberalism, the latter group advocated for social justice in a city plagued by severe class stratification and racial segregation. Glick examines how mainstream and alternative filmmakers turned to the archives, civic institutions, and production facilities of Los Angeles in order to both change popular understandings of the city and shape the social consciousness of the nation.

Praise For Los Angeles Documentary and the Production of Public History, 1958-1977…

"Documentary makers who value the opportunity to understand how films of that era got made, and how the production and distribution practices established then continue to influence the market today, will profit greatly from reading this book."
— Documentary

"The book is an encouragement to engage, now, with documentaries being made at the grassroots level by activist filmmakers and collectives, rather than waiting for the glossy, neutered account of the struggle."
— Los Angeles Review of Books

"[This book] sheds a renovated and original light on the history of the twentieth century media culture(s) of L.A., and in the same way it reveals the potentialities of meticulous discursive excavations into the non-fiction realm, reversing film canons and stressing social and cultural functions that make this book be a relevant one in the field of film history, certainly, but in the field of contemporary history at large too: it is a passionate interrogation of moving image as a source of historiography and a productive factor of history. . . . Los Angeles Documentary deserves great attention not only as a deeply researched cinema-history book, but as a nuanced and sharp cultural and political study as well."
— Synoptique

"An essential contribution to an emerging field of documentary research that seeks to synthesize connections among otherwise coterminous yet parallel strands of documentary histories. . . . Above all, the book makes a point about the value of avoiding the binary cliché of an independent documentarian as an atomized private individual in opposition to government, while shedding light on Cold War documentary culture in general."
— Film Quarterly

"Joshua Glick’s book is an exemplary investigation into and deconstruction of the varying visions set forth through documentary practice."
— Film Matters

"Los Angeles Documentary and the Production of Public History, 1958–1977 proves there is still much to be investigated in the timeline of America’s film production past. The acute specificity of Glick’s historical narrative makes his book a unique and necessary resource for understanding the evolution of Los Angeles documentary production, the works that were produced, and their impact on the formation of American identity."
— Journal of Film and Video

Joshua Glick is an Assistant Professor of English, Film, and Media Studies at Hendrix College and a Fellow at the Open Documentary Lab, MIT. He teaches courses on global Hollywood, race and representation, documentary history and theory, and emerging media formations.
Loading...
or support indie stores by buying on