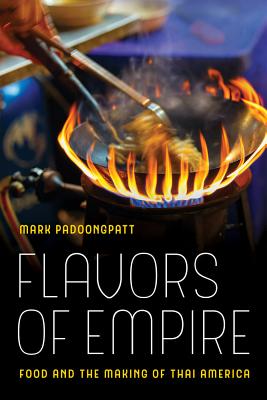 Food and the Making of Thai America (American Crossroads #45)

With a uniquely balanced combination of salty, sweet, sour, and spicy flavors, Thai food burst onto Los Angeles’s and America’s culinary scene in the 1980s. Flavors of Empire examines the rise of Thai food and the way it shaped the racial and ethnic contours of Thai American identity and community. Full of vivid oral histories and new archival material, this book explores the factors that made foodways central to the Thai American experience. Starting with American Cold War intervention in Thailand, Mark Padoongpatt traces how informal empire allowed U.S. citizens to discover Thai cuisine abroad and introduce it inside the United States. When Thais arrived in Los Angeles, they reinvented and repackaged Thai food in various ways to meet the rising popularity of the cuisine in urban and suburban spaces. Padoongpatt opens up the history and politics of Thai food for the first time, all while demonstrating how race emerges in seemingly mundane and unexpected places.

Praise For Flavors of Empire: Food and the Making of Thai America (American Crossroads #45)…

"I highly recommend this book; it is a feast of great flavours."
— Pacific Affairs

"Padoongpatt provides a much-needed narrative on Thai Americans in Los Angeles by focusing on Thai food and its connection to globalism, policy, immigration, race, notions of empire, and making place in Los Angeles."

"An important contribution that not only illuminates the formation of the Thai American community but also offers a novel approach that takes foodways as a critical entry point to explore the entanglements of American empire, Thai migration and racialization."
— Gastronomica

Mark Padoongpatt is Assistant Professor of Asian and Asian American Studies at the University of Nevada, Las Vegas.