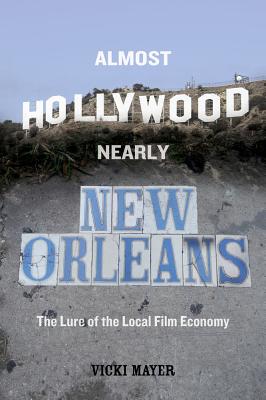 The Lure of the Local Film Economy

Early in the twenty-first century, Louisiana, one of the poorest states in the United States, redirected millions in tax dollars from the public coffers in an effort to become the top location site globally for the production of Hollywood films and television series. Why would lawmakers support such a policy? Why would citizens accept the policy’s uncomfortable effects on their economy and culture? Almost Hollywood, Nearly New Orleans addresses these questions through a study of the local and everyday experiences of the film economy in New Orleans, Louisiana—a city that has twice pursued the goal of becoming a movie production capital. From the silent era to today’s Hollywood South, Vicki Mayer explains that the aura of a film economy is inseparable from a prevailing sense of home, even as it changes that place irrevocably.

"Almost Hollywood, Nearly New Orleans adroitly probes The Crescent City’s ambivalent relation to its status as Hollywood South. … [the] book constitutes a timely contribution to the study of media industries for its thorough accounting of the debts incurred by a state like Louisiana and a city like New Orleans—and the unequal ways in which those burdens are distributed across racially and socioeconomically divided landscapes."
— Media Industries Journal

"Mayer offers compelling evidence for rethinking the material benefits of film tax credits. Using New Orleans as a case study is especially conducive towards understanding the effects of neoliberal cultural policy on the most marginalized areas of North America. Importantly, Mayer’s focus on intersections of race and class provide the necessary framework for thinking about how other local film economies in burgeoning North American cities such as Toronto, Atlanta, and Vancouver have dispossessed underprivileged communities. To that end, Mayer’s book offers a cautionary tale about the political embrace of an entrepreneurial film industry and its cultural, political, and economic effects."
— Synoptique: An Online Journal for Film and Moving Image Studies

Vicki Mayer is Professor of Communication at Tulane University. She is coeditor of the journal Television & New Media and author or editor of several books and journal articles about media production, creative industries, and cultural work.
Loading...
or support indie stores by buying on