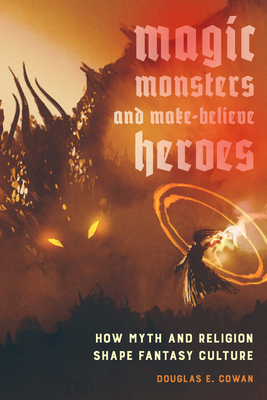 Magic, Monsters, and Make-Believe Heroes looks at fantasy film, television, and participative culture as evidence of our ongoing need for a mythic vision—for stories larger than ourselves into which we write ourselves and through which we can become the heroes of our own story. Why do we tell and retell the same stories over and over when we know they can’t possibly be true? Contrary to popular belief, it’s not because pop culture has run out of good ideas. Rather, it is precisely because these stories are so fantastic, some resonating so deeply that we elevate them to the status of religion. Illuminating everything from Buffy the Vampire Slayer to Dungeons and Dragons, and from Drunken Master to Mad Max, Douglas E. Cowan offers a modern manifesto for why and how mythology remains a vital force today.

Douglas E. Cowan is Professor of Religious Studies and Social Development Studies at Renison University College. He is the author of Sacred Terror: Religion and Horror on the Silver Screen, Sacred Space: The Quest for Transcendence in Science Fiction Film and Television, and, most recently, America’s Dark Theologian: The Religious Imagination of Stephen King.

"Magic, Monsters and Make-Believe Heroes is a joy to read because it gloriously and lovingly destabilises texts by reminding us that the reader/viewer/gamer is not a blank slate. In roaming across platforms, it also breaks down some of the artificial divides within the study of the fantastic."
— Times Higher Education

"I would recommend this book for anyone interested in fantasy culture. It is entertaining, informative, and accessible. Using it in an undergraduate course setting would be ideal. It would also work well as a birthday gift for that D&D fanatic or Buffy fan in your own family tree."
— Journal of the American Academy of Religion

"While some scholars may be dubious about the importance of analyzing, for example, a YouTube series created by Star Trek actor Will Wheaton, “geek” culture has become increasingly mainstream in the past few years. Many undergraduates want to produce papers on such material and this book provides a helpful exemplar of how to do this well. The book’s accessible writing style would make it ideal for an undergraduate course looking at religion and popular culture. But Magic, Monsters, and Make-Believe Heroes would also be well-suited for a course on creative writing, or even game design."
— Nova Religio

"Magic, Monsters, and Make-Believe Heroes aims to discover the contours of fantasy culture and explain why these works hold such power over us. It is very successful in doing so."
— Reading Religion
or support indie stores by buying on
Copyright © 2020 American Booksellers Association