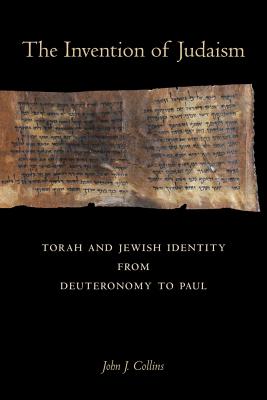 The Invention of Judaism (Paperback)

Most people understand Judaism to be the Torah and the Torah to be Judaism. However, in The Invention of Judaism, John J. Collins persuasively argues this was not always the case. The Torah became the touchstone for most of Judaism’s adherents only in the hands of the rabbis of late antiquity. For 600 years prior, from the Babylonian Exile to the Roman destruction of the Second Temple, there was enormous variation in the way the Torah was understood. Collins provides a comprehensive account of the role of the Torah in ancient Judaism, exploring key moments in its history, beginning with the formation of Deuteronomy and continuing through the Maccabean revolt and the rise of Jewish sectarianism and early Christianity.

John J. Collins is Professor of Old Testament Criticism and Interpretation at Yale Divinity School. His books include Introduction to the Hebrew Bible, The Dead Sea Scrolls: A Biography and The Apocalyptic Imagination. He is general editor of the Yale Anchor Bible Series.

Praise For The Invention of Judaism: Torah and Jewish Identity from Deuteronomy to Paul (Taubman Lectures in Jewish Studies #7)…

"Collins has here laid the levelheaded and thorough groundwork for anyone wanting to explore Jewish identity in antiquity."
— Reading Religion

"A tour de force by one of today’s leading scholars... Summing Up: Highly recommended."
— CHOICE

"Collins’ masterful elucidation of the many and diverse materials he mobilizes on behalf of his argument makes this book a valuable resource for readers mulling the semantics of Jewish identity during the Second Temple period. . . . a necessary call to common sense as to the misguided premise that Judaism was born of Christianity rather than Christianity of Judaism."
— Horizons: The Journal of the College Theology Society

"The Invention of Judaism is well worth one's time, particularly if one wants to familiarize oneself with the lay of the land in the Second Temple period or is well-versed in Greco-Roman customs and literature behind the NT but need a refresher over debates in Jewish tradition from the same time period."
— Restoration Quarterly
or support indie stores by buying on
Copyright © 2020 American Booksellers Association