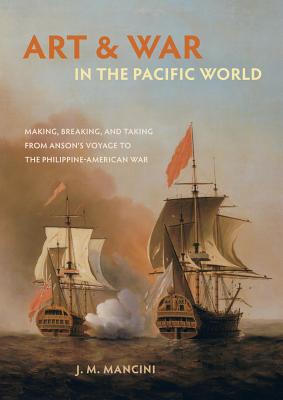 Art and War in the Pacific World

Making, Breaking, and Taking from Anson's Voyage to the Philippine-American War

The Pacific world has long been recognized as a hub for the global trade in art objects, but the history of art and architecture has seldom reckoned with another profound aspect of the region’s history: its exposure to global conflict during the British and US imperial incursions of the eighteenth and nineteenth centuries. Art and War in the Pacific World provides a new view of the Pacific world and of global artistic interaction by exploring how the making, alteration, looting, and destruction of images, objects, buildings, and landscapes intersected with the exercise of force. Focusing on the period from Commodore George Anson’s voyage to the Philippine-American War, J. M. Mancini’s exceptional study deftly weaves together disparate strands of history to create a novel paradigm for cultural analysis.

Praise For Art and War in the Pacific World: Making, Breaking, and Taking from Anson's Voyage to the Philippine-American War…

"...essential reading for scholars interested in the global interchange of art, objects, and architecture during the eighteenth and nineteenth centuries . . . . Mancini’s book is a critical study that offers a welcome reassessment of the chronology of empire in the Pacific. Moreover, Mancini provides an account of the integral role that vision, visuality, and objects played in this important history. . . . [it] should be included in any classroom that dives into a discussion of Asia’s interrelationship with the West during the eighteenth and nineteenth centuries"
— American Historical Review

“…in this compelling work of interdisciplinary scholarship. . . .Mancini’s provocative challenges to conventional wisdom are well worth reading.”
— Pacific Historical Review

"...a remarkable work that provides a detailed examination and analysis of a little-studied aspect of trans-Pacific history. . . .With the rise of the Pacific World as a viable subfield for both research and pedagogy, this book should be in high demand across multiple disciplines."
— Global Maritime History

“In this lavishly illustrated book, Mancini provides a rich multidimensional account of the role of war in the movements of objects and ideas in and beyond the Pacific Basin, as well as the impact of violent conflicts spilling over from other world regions to affect the arts and architecture in places like the Philippines and California. As such, the book offers a much wider perspective on the material culture of empire and war than the term 'art' in the title may suggest at first sight.…This is an important read for historians of the early modern and modern Pacific world, as well as for scholars working on the material cultures of the empires involved in the region.”
— The Americas

"Art and War in the Pacific World makes valuable interventions in the study of the Pacific. . . . Mancini’s approach is a useful model for historians and art historians writing about the exchanges that influenced the movement and appearance of ‘art, artifacts, and architecture’ within and outside the region. By placing the Philippines at the centre of imperial conflict, Mancini has set the stage for future studies of the trans-Pacific world within a colonial context."
— Journal of Pacific History

"Through its temporal, geographic, and maritime expansions, the book successfully articulates the limits of the spatial and scholarly borders that define American history and material culture studies. Art and War in the Pacific World demonstrates that the geographic boundaries of colonies, nations, and continents that determine the divisions of our fields are largely of scholarly making. Examining the far more complicated worlds of early modern and modern actors in the Pacific Americas brings provocative new questions to light."
— Winterthur Portfolio

"Mancini expertly highlights the entwined nature of art and war through examining how the spoils of war are valued and circulate into private hands, how artwork from the Philippines made its way to California missions, and the impact that warfare can have on city planning and architecture."

— The Journal of American History

J. M. Mancini is Senior Lecturer in the Department of History, Maynooth University, Ireland. Her publications include Pre-Modernism: Art-World Change and American Culture from the Civil War to the Armory Show and Architecture and Armed Conflict, edited with Keith Bresnahan.
Loading...
or support indie stores by buying on