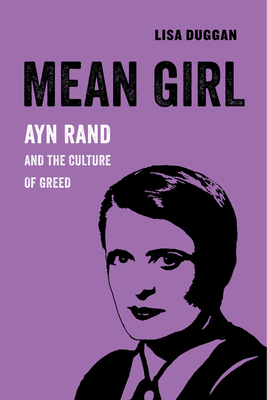 ?"?The therapeutic value of Duggan’s book goes well beyond freeing me from shame for my teen-age lack of literary taste and political discernment; it also provides an explanation for our current cultural and political moment. . . . Duggan’s book sums up Rand’s life and philosophy in under ninety pages?."
— Masha Gessen

“‘A history of the influence of Ayn Rand and her particular brand of narcissistic amorality, and an argument that her novels function now as ‘conversion machines for our contemporary culture of greed.’ Exhibit A: Paul Ryan.”
— LitHub

"Duggan’s skills as a cultural historian and her sharp-witted socio-political commentary fuse seamlessly together in this short yet fascinating book that is a necessary read for students of culture and politics, but also activists and organisers who feel the deep disillusionment of what seems like a never-ending neoliberal era."
— LSE Review of Books

“Lisa Duggan gets it exactly right in Mean Girl: Ayn Rand and the Culture of Greed when she writes that Rand's ‘particular gift was not for philosophical elaboration, but for stark condensation and aphorism. She deployed this gift to create a moral economy of inequality to infuse her softly pornographic romance fiction with the political eros that would captivate a mass readership.’"
— Inside Higher Education

“Duggan goes beyond the more standard biographical accounts of Rand and gets to the bottom of her novels and how they set a disturbing tone for global capitalism. Further, Duggan explains the mischaracterizations of Rand in modern memory, and provides expert analysis of current affairs in helping readers to contextualize the actual historical Rand and her likely political endorsements as well as her most reactionary views.”
— Truthout

“Cultural historian Lisa Duggan has written a small, perfect book which accomplishes so much in only a few pages, with irony and wit, humor and insight. . . . The book is fun, funny and in only 116 pages explains so much about not only its subject but of our neoliberal or reactionary culture of greed and its obstinate commitment to economic fantasy.”
— KPFK/Bibliocracy

“Lisa Duggan wrote a book that explains everything you need to know about Ayn Rand and why she became so enormously consequential so that you don’t have to read Rand’s work yourself.”

"The power of Duggan’s book seems that maybe in unmasking Rand’s philosophical legitimacy and hold on the right removes a central prop and leaves the right ever more naked.”
— The Baffler

Lisa Duggan is a historian, journalist, activist, and Professor of Social and Cultural Analysis at New York University. She is the author of The Twilight of Equality? Neoliberalism, Cultural Politics, and the Attack on Democracy.
Loading...
or support indie stores by buying on