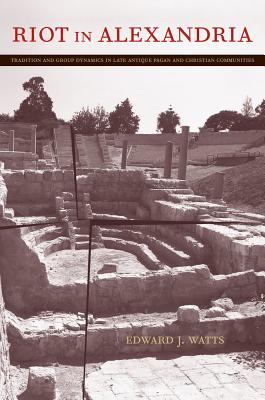 This innovative study uses one well-documented moment of violence as a starting point for a wide-ranging examination of the ideas and interactions of pagan philosophers, Christian ascetics, and bishops from the fourth to the early seventh century. Edward J. Watts reconstructs a riot that erupted in Alexandria in 486 when a group of students attacked a Christian adolescent who had publicly insulted the students' teachers. Pagan students, Christians affiliated with a local monastery, and the Alexandrian ecclesiastical leaders all cast the incident in a different light, and each group tried with that interpretation to influence subsequent events. Watts, drawing on Greek, Latin, Coptic, and Syriac sources, shows how historical traditions and notions of a shared past shaped the interactions and behavior of these high-profile communities. Connecting oral and written texts to the personal relationships that gave them meaning and to the actions that gave them form, Riot in Alexandria draws new attention to the understudied social and cultural history of the later fifth-century Roman world and at the same time opens a new window on late antique intellectual life.

Edward J. Watts, Associate Professor in the Department of History at Indiana University, is the author of City and School in Late Antique Athens and Alexandria, winner of the Outstanding Publication Award from the Classical Association of the Midwest and South.

Praise For Riot in Alexandria: Tradition and Group Dynamics in Late Antique Pagan and Christian Communities (Transformation of the Classical Heritage #46)…

“Riot in Alexandria is a noteworthy contribution to the study of Late Antiquity because of its original perspective. It succeeds in showing the real importance views on the past had, how they shaped communities, and how they could be manipulated. Watts refocuses attention on the internal life of communities to understand wider processes such as the “Christianisation of the Empire” and thus allows micro-history to elucidate macro-history. Although our sources are all written, Watts constantly reminds us that the specific memories communities created and kept alive were primarily oral and must have circulated widely.”
— Bryn Mawr Classical Review

“There is much here to admire.”
— Church History: Studies in Christiany and Culture

“Edward Watts has written a wide-ranging, thoughtful, and stimulating exploration of what can be learned from a single episode.”
— Catholic Historical Review

"Well-researched [and] carefully argued. . . . Watts has an excellent sense of what needs to be explained for non-specialists."
— European Legacy
or support indie stores by buying on
Copyright © 2020 American Booksellers Association