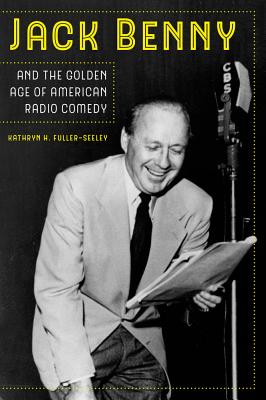 Jack Benny and the Golden Age of American Radio Comedy

The king of radio comedy from the Great Depression through the early 1950s, Jack Benny was one of the most influential entertainers in twentieth-century America. A master of comic timing and an innovative producer, Benny, with his radio writers, developed a weekly situation comedy to meet radio’s endless need for new material, at the same time integrating advertising into the show’s humor. Through the character of the vain, cheap everyman, Benny created a fall guy, whose frustrated struggles with his employees addressed midcentury America’s concerns with race, gender, commercialism, and sexual identity. Kathryn H. Fuller-Seeley contextualizes her analysis of Jack Benny and his entourage with thoughtful insight into the intersections of competing entertainment industries and provides plenty of evidence that transmedia stardom, branded entertainment, and virality are not new phenomena but current iterations of key aspects in American commercial cultural history.

“…a deeply researched and powerfully argued analysis of Benny’s persona, productions, distribution, advertising, and sponsorship from the early 1930s through the late 1950s. …It is a must-read for scholars seeking to understand the inner workings, products, and impact of mass media and intermedia develop­ment, consumer culture, and celebrity culture during the heyday of mid-twentieth-century American commercial radio broadcasting and how to write about such issues incisively and inclusively.”
— The Journal of American History

"Kathryn H. Fuller-Seeley’s monograph on Jack Benny provides the first full-length scholarly account of the comedian’s influential broadcasting career, which began in 1932 and ended with his death in 1974. As well as discussing his film and television work, she presents an extremely detailed analysis of Benny’s long-running, but largely overlooked, multifaceted radio program (1932–1955) which she calls his ‘greatest achievement’."
— Historical Journal of Film Radio and Television

Kathryn H. Fuller-Seeley is Professor in the Radio-Television-Film department at the University of Texas at Austin. She is the author of, among other books, At the Picture Show: Small Town Audiences and the Creation of Movie Fan Culture and the editor of Hollywood in the Neighborhood: Historical Case Studies of Local Moviegoing.
Loading...
or support indie stores by buying on