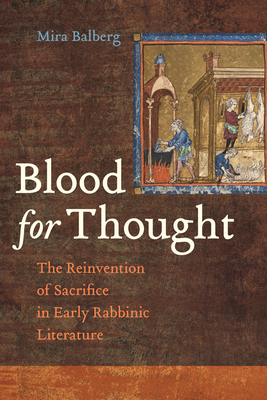 The Reinvention of Sacrifice in Early Rabbinic Literature

Blood for Thought delves into a relatively unexplored area of rabbinic literature: the vast corpus of laws, regulations, and instructions pertaining to sacrificial rituals. Mira Balberg traces and analyzes the ways in which the early rabbis interpreted and conceived of biblical sacrifices, reinventing them as a site through which to negotiate intellectual, cultural, and religious trends and practices in their surrounding world. Rather than viewing the rabbinic project as an attempt to generate a nonsacrificial version of Judaism, she argues that the rabbis developed a new sacrificial Jewish tradition altogether, consisting of not merely substitutes to sacrifice but elaborate practical manuals that redefined the processes themselves, radically transforming the meanings of sacrifice, its efficacy, and its value.

Praise For Blood for Thought: The Reinvention of Sacrifice in Early Rabbinic Literature…

"Overall, this monograph is enjoyable and instructive. One is invited to explore related themes that, perhaps surprisingly, are never explicitly mentioned in this book and yet are clearly relevant to its argument, including the Foucauldian notion of power as ‘discourse’, the question of the struggle for cultural hegemony with Christianity, the effort to justify a religious life without a sacrificial system, and, finally, the emerging cultural rivalry between the Roman imperial religion and the rabbis’ ‘utopia’. . . . impeccable."
— Journal of Jewish Studies

"Blood for Thought is a fresh, powerful, and convincing argument for the distinctive role of Judaism in the history of religions, as well as the relationship between speech and action, human and animal, and the broader human meanings of sacrifice."
— H-Net Reviews

Mira Balberg is Associate Professor of Religious Studies at Northwestern University. She is the author of Purity, Body, and Self in Early Rabbinic Literature.
Loading...
or support indie stores by buying on