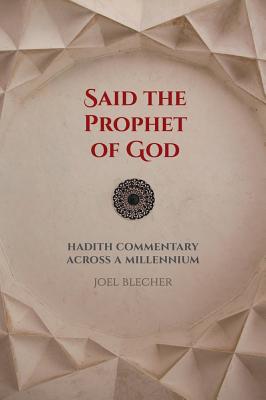 Said the Prophet of God (Paperback)

Hadith Commentary across a Millennium

Although scholars have long studied how Muslims authenticated and transmitted Muhammad’s sayings and practices (hadith), the story of how they interpreted and reinterpreted the meanings of hadith over the past millennium has yet to be told. Joel Blecher takes up this charge, illuminating the rich social and intellectual history of hadith commentary at three critical moments and locales: classical Andalusia, medieval Egypt, and modern India. Weaving together tales of public debates, high court rivalries, and colonial politics with analyses of ethnographic field notes and fine-grained arguments adorning the margins of manuscripts, Said the Prophet of God offers new avenues for the study of religion, history, anthropology, and law.

Joel Blecher is Assistant Professor of History at George Washington University. His writings have appeared in the Journal of Near Eastern Studies, Oriens, and the Atlantic.

Praise For Said the Prophet of God: Hadith Commentary across a Millennium…

"In his marvelous new book, Said the Prophet of God: Hadith Commentary Across a Millennium, Joel Blecher, engages with tremendous lucidity and brilliance the topic of Hadith commentaries in Muslim intellectual and social history across time and space. Traversing the pre-modern and modern periods in sites ranging from the Middle East to South Asia, this book presents in remarkable detail and with considerable nuance the intellectual, social, and material stakes of the discipline and performance of the Hadith commentarial tradition."
— New Books Network

"Blecher’s text will come in handy as classroom reading for courses on a range of topics, and it will open doors for new scholars to further explore the uses and limits of hadith collections and the scholarship of Hadith glossators."
— Reading Religion

"Historians regularly trace the ways in which some argument or practice unfolds in a given tradition—that's just what Joel Blecher's (2017) book Said the Prophet does in relation to hadith commentary. The book spans centuries and continents to tell us something extraordinarily illuminating not only about the figures it treats but about the tradition that helps define them."
— Religious Compass

“With an admirable expertise and impressive knowledge of minute detail, Blecher traverses the exegetical reception and commentarial reenactment of al-Bukhari’s Sahih across space and time.... Blecher’s treatment of hadith commentary by a combination of methods from the fields of social history, intellectual history, and social theory is commendable, as is his aspiration to foreground the performative and interactional aspects of the commentator’s activity. This approach yields excellent results.”
— Bulletin of the School of Oriental and African Studies

"The temporal and geographic breadth of Blecher's canvas is supported both by his rigorous textual study and by ethnographic work in both the Middle East and South Asia. . . . This is certainly a foundational study in the field of Islamic social and intellectual history."
— Religious Studies Review
or support indie stores by buying on
Copyright © 2020 American Booksellers Association