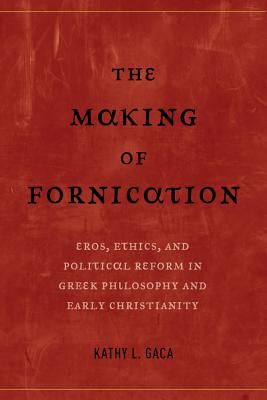 The Making of Fornication

This provocative work provides a radical reassessment of the emergence and nature of Christian sexual morality, the dominant moral paradigm in Western society since late antiquity. While many scholars, including Michel Foucault, have found the basis of early Christian sexual restrictions in Greek ethics and political philosophy, Kathy L. Gaca demonstrates on compelling new grounds that it is misguided to regard Greek ethics and political theory—with their proposed reforms of eroticism, the family, and civic order—as the foundation of Christian sexual austerity. Rather, in this thoroughly informed and wide-ranging study, Gaca shows that early Christian goals to eradicate fornication were derived from the sexual rules and poetic norms of the Septuagint, or Greek Bible, and that early Christian writers adapted these rules and norms in ways that reveal fascinating insights into the distinctive and largely non-philosophical character of Christian sexual morality.

Writing with an authoritative command of both Greek philosophy and early Christian writings, Gaca investigates Plato, the Stoics, the Pythagoreans, Philo of Alexandria, the apostle Paul, and the patristic Christians Clement of Alexandria, Tatian, and Epiphanes, freshly elucidating their ideas on sexual reform with precision, depth, and originality. Early Christian writers, she demonstrates, transformed all that they borrowed from Greek ethics and political philosophy to launch innovative programs against fornication that were inimical to Greek cultural mores, popular and philosophical alike. The Septuagint's mandate to worship the Lord alone among all gods led to a Christian program to revolutionize Gentile sexual practices, only for early Christians to find this virtually impossible to carry out without going to extremes of sexual renunciation.

Knowledgeable and wide-ranging, this work of intellectual history and ethics cogently demonstrates why early Christian sexual restrictions took such repressive ascetic forms, and casts sobering light on what Christian sexual morality has meant for religious pluralism in Western culture, especially among women as its bearers.

Praise For The Making of Fornication: Eros, Ethics, and Political Reform in Greek Philosophy and Early Christianity (Hellenistic Culture and Society #40)…

“Gaca’s ability to navigate confidently across both the Greek philosophical tradition and the Septuagint is as rare as it is valuable. An eye-opener.”
— Times Literary Supplement

“Learned and well-argued, this book is bound to revolutionize our thinking about an important subject of religious and cultureal history.”
— International Review of Biblical Studies

“On almost every page close reading repays the effort.”
— Journal of Biblical Literature

“Gaca’s book makes a valuable contribution to the history of sexual ethics in antiquity and will be indispensable reading for all scholars and students interested in that topic.”
— Journal of Early Christian Studies

“Rich. . . . Gaca’s detailed analysis of the several traditions, and her incorporation of the Septuagint, NT, and Philo in the argument, mark a significant advance over Foucault’s analysis in The History of Sexuality. Indispensable to future research on the subject and should be in every university library.”
— Religious Studies Review

Kathy L. Gaca is Associate Professor of Classical Studies at Vanderbilt University.
Loading...
or support indie stores by buying on