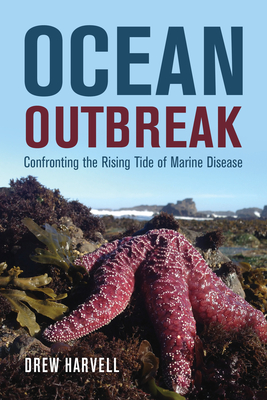 There is a growing crisis in our oceans: mysterious outbreaks of infectious disease are on the rise. Marine epidemics can cause mass die-offs of wildlife from the bottom to the top of food chains, impacting the health of ocean ecosystems as well as lives on land. Portending global environmental disaster, ocean outbreaks are fueled by warming seas, sewage dumping, unregulated aquaculture, and drifting plastic.

Ocean Outbreak follows renowned scientist Drew Harvell and her colleagues into the field as they investigate how four iconic marine animals—corals, abalone, salmon, and starfish—have been devastated by disease. Based on over twenty years of research, this firsthand account of the sometimes gradual, sometimes exploding impact of disease on our ocean’s biodiversity ends with solutions and a call to action. Only through policy changes and the implementation of innovative solutions from nature can we reduce major outbreaks, save some ocean ecosystems, and protect our fragile environment.

"Harvell gives readers an inside look at the diseases that are on the rise beneath the waves. . . . in a detailed, engaging narrative."
— Smithsonian

"Despite the daunting challenge that marine diseases present, Harvell's book manages to inspire both pragmatism and optimism, which likely stems from the immense number of people working alongside Harvell to better understand these issues."
— Forbes Online

"Coral bleaching has become something of an everyday apocalypse. Researched, documented and foretold, it is a biotic meltdown to which we have become all too accustomed. But the seas hold other more insidious disasters, as much our fault as the heating of the oceans. They tend, though, to be less covered by the media, which is why Ocean Outbreak is such an important book. . . .[Harvell] does a first-rate job of inspiring readers, and of providing the right kind of proselytising to turn marine epidemiology into a go-to career for a new and concerned generation."
— New Scientist

"Harvell vividly recounts her work at the front line, studying die-offs such as the past decade’s catastrophic starfish crash. . . . a succinct summation of two decades of research."
— Nature

"A sobering account of what is happening to our seas. . . .This book is a must-read for all who care about the future of our oceans."
— Times Higher Education

“The book is written in a way that science-interested members of the public, and policymakers, will find useful—but students and researchers in marine science, yearning to understand more about marine disease outbreaks, will gain just as much. Harvell beautifully articulates the urgent need for scientists and non-scientists alike to do more to understand and protect the ocean.”
— Oceanography

"An engaging, eye-opening report on the diseases affecting the health of the ocean . . . Harvell writes from a scientist’s perspective, yet her style is down to earth and her prose is accessible. As such, she achieves her essential objective of making the public “more aware of the seriousness of the threats that ocean pathogens pose to our food supplies, economies, livelihoods, and health.”
— Foreword Reviews

"This well-written narrative can benefit a wide range of audiences. It provides insights not only into marine diseases but also into the constraints and practices of scientists responding to environmental threats."
— CHOICE

"This book is written with the intent to encourage development of policies to prevent and limit the spread of future outbreaks by not only educating policymakers, but engaging a broader audience. Harvell makes a plea for action, citing the need for surveillance of farmed species like salmon, shrimp, oysters, and abalone, where disease outbreaks also pose threats for wild populations."
— Fisheries

"Harvell is a skilled science writer and covers the topics with sufficient depth to keep disease aficionados on their toes, marveling at the complexity of diseases in the ocean. . . .The narrative is beautifully written and designed to even be consumed by people who know nothing about infectious [marine] diseases or, worse yet, might fear words like “microbe” or “pathogen” the way a 6th grade math phobe would look at his/her first quadratic equation."
— SeaDoc Society Blog

"We’ve all heard the oceans are sick, but this book helps explain why through recent histories of four iconic marine animals”
— Society of Environmental Journalists Blog

"Harvell is a writer with a style that is as captivating as it is informative."
— Well-Read Naturalist

"This personal account makes for a lively read, filled with both humorous and harrowing stories from field research. . . . well written and appropriate for a range of readers interested in how global change affects ocean ecosystems and the interconnectedness of ocean organisms."
— Quarterly Review of Biology

Drew Harvell is Professor of Marine Ecology at Cornell University. She has published over 170 scientific articles in leading journals and is a fellow of the Ecological Society of America and the Atkinson Center for a Sustainable Future. Her book A Sea of Glass received a National Outdoor Book Award and was recognized as one of the Smithsonian's Best “Art Meets Science” Books of 2016.
Loading...
or support indie stores by buying on