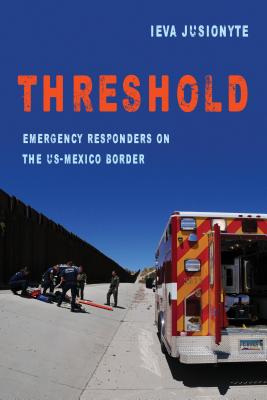 "Jusionyte explores the sister towns bisected by the border from many angles in this illuminating and poignant exploration of a place and situation that are little discussed yet have significant implications for larger political discourse."—Publishers Weekly, STARRED Review

Emergency responders on the US-Mexico border operate at the edges of two states. They rush patients to hospitals across country lines, tend to the broken bones of migrants who jump over the wall, and put out fires that know no national boundaries. Paramedics and firefighters on both sides of the border are tasked with saving lives and preventing disasters in the harsh terrain at the center of divisive national debates.

Ieva Jusionyte’s firsthand experience as an emergency responder provides the background for her gripping examination of the politics of injury and rescue in the militarized region surrounding the US-Mexico border. Operating in this area, firefighters and paramedics are torn between their mandate as frontline state actors and their responsibility as professional rescuers, between the limits of law and pull of ethics. From this vantage they witness what unfolds when territorial sovereignty, tactical infrastructure, and the natural environment collide. Jusionyte reveals the binational brotherhood that forms in this crucible to stand in the way of catastrophe. Through beautiful ethnography and a uniquely personal perspective, Threshold provides a new way to understand politicized issues ranging from border security and undocumented migration to public access to healthcare today.

“[Jusionyte] writes movingly of the collaborative efforts between Nogales, in Arizona, and its counterpart across the border, Nogales, Sonora—the two towns’ fire departments have frequently called upon one another for aid. Jusionyte explores the sister towns bisected by the border from many angles in this illuminating and poignant exploration of a place and situation that are little discussed yet have significant implications for larger political discourse.”
— Publishers Weekly

“Threshold takes the reader close to realities so easily overlooked that no public figure has even gotten around to lying about them.”
— Inside Higher Education

"This volume explores the dilemmas faced by paramedics and firefighters along the US–Mexico border as they try to balance their responsibilities as lifesavers with the demands of the laws that govern the border areas in which they work."
— Survival: Global Politics and Strategy

“A staggering work of public anthropology, one that is richly detailed, finely argued, and written in an engaging, even captivating style that brings the reader right to the frontlines of the so-called ‘hostile environments’ and ‘tactical infrastructures’ that now mark the US-Mexico border.”

"A timely book that will appeal to academic and public audiences interested in a more nuanced understanding of security and humanitarianism on the border."
— Medical Anthropology Quarterly

Ieva Jusionyte is Assistant Professor of Anthropology and Social Studies at Harvard University and the author of Savage Frontier: Making News and Security on the Argentine Border. She has trained and volunteered as an emergency medical technician, paramedic, and wildland firefighter in Florida, Arizona, and Massachusetts.
Loading...
or support indie stores by buying on