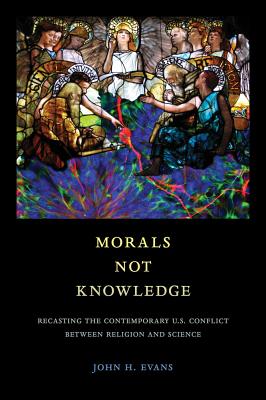 Recasting the Contemporary U.S. Conflict between Religion and Science

A free ebook version of this title is available through Luminos, University of California Press’s Open Access publishing program for monographs. Visit www.luminosoa.org to learn more.

In a time when conservative politicians challenge the irrefutability of scientific findings such as climate change, it is more important than ever to understand the conflict at the heart of the “religion vs. science” debates unfolding in the public sphere. In this groundbreaking work, John H. Evans reveals that, with a few limited exceptions, even the most conservative religious Americans accept science’s ability to make factual claims about the world. However, many religious people take issue with the morality implicitly promoted by some forms of science. Using clear and engaging scholarship, Evans upends the prevailing notion that there is a fundamental conflict over the way that scientists and religious people make claims about nature and argues that only by properly understanding moral conflict between contemporary religion and science will we be able to contribute to a more productive interaction between these two great institutions.


Praise For Morals Not Knowledge: Recasting the Contemporary U.S. Conflict between Religion and Science…

"John H. Evans has written a well-researched, multi-disciplinary text that speaks to our current historical moment. Using the sociology of religion; the history of sociology, science, and science's relationship with religion; and data sets from surveys and in-depth interviews, Evans explores and troubles the alleged 'foundational knowledge conflict' between religion and science."
— Metapsychology Online Reviews

"Morals Not Knowledge provides a roadmap for a more constructive dialogue, if not full reconciliation, between the two camps. . . . offers an engaging and intriguing reconceptualization of science, religion, and the nature of conflict between them. It is a must-read for social scientists whose work focuses on the interface between science and religion, and it will also be of interest to historians, scientists, theologians, and philosophers who study these issues. Evans makes a significant advance with this book, and it is likely to spur exciting new research in coming years to test and refine its claims."
— American Journal of Sociology

John H. Evans is Professor of Sociology at the University of California, San Diego.