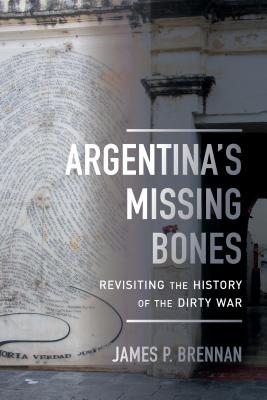 Argentina’s Missing Bones is the first comprehensive English-language work of historical scholarship on the 1976–83 military dictatorship and Argentina’s notorious experience with state terrorism during the so-called dirty war. It examines this history in a single but crucial place: Córdoba, Argentina’s second largest city. A site of thunderous working-class and student protest prior to the dictatorship, it later became a place where state terrorism was particularly cruel. Considering the legacy of this violent period, James P. Brennan examines the role of the state in constructing a public memory of the violence and in holding those responsible accountable through the most extensive trials for crimes against humanity to take place anywhere in Latin America.

"Overall, Missing Bones is a fantastic book that asserts the importance of understanding Córdoba within the context of the history of Argentina’s Dirty War"
— H-Net Reviews

"Brennan convincingly analyzes how remembering the Dirty War in Argentina is not only an individual or private matter but also encompasses an institutional memory fomented and fashioned by the policies of the Kirchner governments (96). By focusing on Córdoba, Brennan successfully captures the role of the state in constructing public memory of the Dirty War."
— Journal of Interdisciplinary History

"The strength of Brennan’s book is to enable us to reflect critically on both the dirty war . . . and the memory and justice politics that followed."
— Latin American Research Review

James P. Brennan is Professor of History at the University of California, Riverside, where he teaches modern Latin American history.
Loading...
or support indie stores by buying on