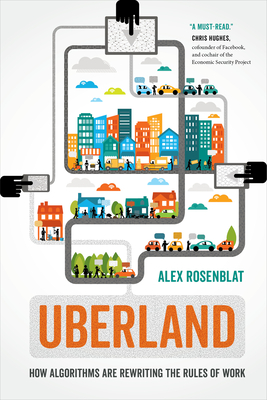 How Algorithms Are Rewriting the Rules of Work

Silicon Valley technology is transforming the way we work, and Uber is leading the charge. An American startup that promised to deliver entrepreneurship for the masses through its technology, Uber instead built a new template for employment using algorithms and Internet platforms. Upending our understanding of work in the digital age, Uberland paints a future where any of us might be managed by a faceless boss.

The neutral language of technology masks the powerful influence algorithms have across the New Economy. Uberland chronicles the stories of drivers in more than twenty-five cities in the United States and Canada over four years, shedding light on their working conditions and providing a window into how they feel behind the wheel. The book also explores Uber’s outsized influence around the world: the billion-dollar company is now influencing everything from debates about sexual harassment and transportation regulations to racial equality campaigns and labor rights initiatives.

Based on award-winning technology ethnographer Alex Rosenblat’s firsthand experience of riding over 5,000 miles with Uber drivers, daily visits to online forums, and face-to-face discussions with senior Uber employees, Uberland goes beyond the headlines to reveal the complicated politics of popular technologies that are manipulating both workers and consumers.


Praise For Uberland: How Algorithms Are Rewriting the Rules of Work…

“A timely, accessible analysis of a Silicon Valley innovator that disrupted an industry.”
— GeekWire

“This jargon-free and intriguing exposé offers food for thought for anyone interested in worker protections or societal changes driven by technology.”
— Publishers Weekly

"Functions as an examination of both how Uber’s algorithms are changing the way companies operate and exert control over their workers and how those workers are experiencing these changes.”
— Slate

"A timely look at the tensions between technology and the future of employment, and how ambitious startups might be changing the way we see and value work.”
— Mother Jones

“If you care about the future of work, read Uberland by Alex Rosenblat.”
— Theodore Kinni, Strategy + Business

“Rosenblat’s book is a combination of sociological analysis, excerpts from Uber-driver online forums, communications with Uber executives and employees, and an avalanche of in-person interviews with drivers from all over the United States and Canada. Her analysis isn’t a polemic; it is balanced and measured.”
— Los Angeles Review of Books

“A fine work of technology ethnography. . . As someone who believes that technology is a positive force for driving change, I’ll admit to being deeply disturbed by reading Uberland."
— Inside Higher Education

"The most important recent book written about Uber is undoubtedly Alex Rosenblat’s Uberland: How Algorithms Are Rewriting the Rules of Work, which unflinchingly exposes how Uber takes ruthless advantage of its drivers.”
— Medium/The Startup

"Uberland will be of interest for anyone who cares about the future of work, the realities of working in the ‘gig’ economy and the consequences of decoupling work from existing employment relations systems."
— Journal of Industrial Relations

"The book paints a complicated picture of the uneven realities of the gig economy set against the glossy sales pitch of Uber as the future of work."
— Allegra Lab

"Uberland is a timely book as technology increasingly intensifies in our daily lives. It reads like book-length investigative journalism, refreshingly jargon-free. It stays truthful to the stories that drivers tell and is readable and engaging. It is suitable for undergraduate classes in sociology of work; science, technology, and society; and consumption."
— Sociological Forum

Alex Rosenblat is a technology ethnographer. A researcher at the Data & Society Research Institute, she holds an MA in sociology from Queen’s University and a BA in history from McGill University. Rosenblat’s writing has appeared in media outlets such as the New York Times, Harvard Business Review, the Atlantic, Slate, and Fast Company. Her research has received attention worldwide and has been covered in the New York Times, the Wall Street Journal, MIT Technology Review, WIRED, New Scientist, and the Guardian. Many scholarly and professional publications have also published her prizewinning work, including the International Journal of Communication and the Columbia Law Review.