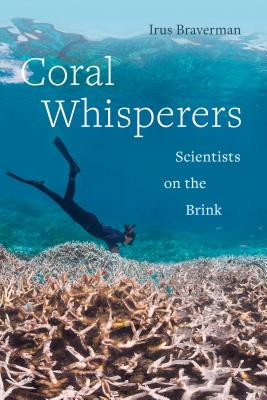 Scientists on the Brink (Critical Environments: Nature, Science, and Politics #3)

In recent years, a catastrophic global bleaching event devastated many of the world’s precious coral reefs. Working on the front lines of ruin, today’s coral scientists are struggling to save these important coral reef ecosystems from the imminent threats of rapidly warming, acidifying, and polluted oceans. Coral Whisperers captures a critical moment in the history of coral reef science. Gleaning insights from over one hundred interviews with leading scientists and conservation managers, Irus Braverman documents a community caught in an existential crisis and alternating between despair and hope. In this important new book, corals emerge not only as signs and measures of environmental catastrophe, but also as catalysts for action.

"Coral Whisperers is exceptional in its scientific detail but also in relating the personal stories of the scientists, or “whisperers,” who follow the lives of corals and invest their own lives in striving to preserve them. Just as important, the book is a stern warning that the earth’s oceans are in grave danger."
— Foreword Reviews

"Analyzing the dual narrative of hope and despair that defines many environmental concerns and discussing the challenges of the various approaches to protecting coral reefs worldwide, Braverman, an experienced diver and an expert on land-use law, brings thoughtfulness and urgency to this well-organized work."
— Library Journal

""[Reading Braverman's book] we benefit immensely by hearing the voices of coral reef whisperers as they speak openly of their uncertainties, fears and hopes. Whatever their differences, as Irus Braverman attests, all these scientists share a deep and infectious love of corals. The author deserves to be congratulated for her learning, lucidity, passion and candour. I emerged from this book feeling a new, if measured, charge of hope for the future survival of coral reefs in some form."
— Times Literary Supplement

“...a volume that is readable both to the non-scientist and to professional biologists interested in the question of the future of coral reefs and corals.”
— Bulletin of the Pacific Circle

"Braverman uses the quotes from her witnesses well and the reader gains an often inspiring insight into the thought processes of scientists who are deeply concerned about one of the key ecosystems on the planet."
— The Biologist

“Braverman’s highly readable, deeply informative and insightful account also serves as a trope for how science adapts to a situation in which reflection must quickly give way to dynamic, focused and effective action.”
— New Scientist

"Through an impressive number of in-depth interviews with experts, Braverman is able to track important changes in coral science over the past decades, especially after massive bleaching events that served as catalysts for the implementation of numerous research and monitoring activities over the globe. . . . Coral Whisperers is an important read, a brave and extraordinary exploration of underwater life to understand the Anthropocene."
— Environmental History

"...Braverman tackles a large-scale problem: global climate change and its impacts on coral reefs––including ocean warming and coral bleaching. Her work is not only about understanding what is happening to corals, but it is also about the effects of these environmental changes on coral scientists themselves. . . . The book contains a lot of information about coral ecology and biology as well as conservation policy and law. In doing so, it also offers a practical introduction to these topics, making it an excellent book for a course in environmental studies as well as appealing to those in STS."
— Science, Technology, & Human Values

"An instructive window into how others perceive the coral reef science community, and has value to both students and established researchers."
— Quarterly Review of Biology

"Written in an accessible style that will appeal to both the avid scholar of science and technology and the merely coral curious, Braverman’s book is a great achievement of science studies, evocative of work by Paul Rabinow, Stefan Helmreich, Donna Haraway, and Anna Tsing. The book clearly sets up the problem of coral decline and recovery as an emblematic issue for the Anthropocene, guiding readers through what Braverman sees as the key points in the coral crisis: scientific oscillations between hope and despair, the unprecedented and increasing extent of coral decline, the growing phenomenon of coral restoration, the inadequacies of law and policy concerning corals, and the cutting edge of assisted evolution and coral bioscience."
— American Ethnologist