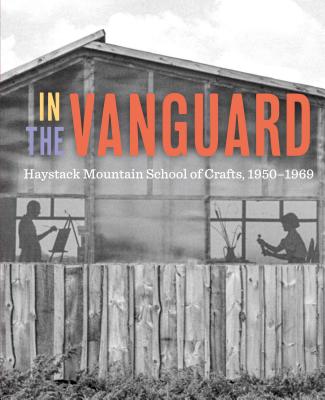 In the Vanguard (Hardcover)

In the Vanguard: Haystack Mountain School of Crafts, 1950–1969 traces this unique school’s impact on American art during the mid-twentieth century. Accompanying a landmark exhibition, this catalogue documents Haystack’s innovative pedagogy and its role as a major force in the studio craft movement. Anni Albers, Robert Arneson, Dale Chihuly, Arline Fisch, Jack Lenor Larsen, Harvey Littleton, and Toshiko Takaezu are among the artists who helped define the school’s model of communally oriented, process-based learning. With deeply researched essays that detail the school’s founding and first two decades, archival photographs, and images of rarely or never-before published works made at Haystack, In the Vanguard introduces readers to the important legacy of this groundbreaking institution.

Published in association with the Portland Museum of Art.

Diana Jocelyn Greenwold is the Associate Curator of American Art at the Portland Museum of Art and holds a PhD in the history of art from the University of California, Berkeley.

M. Rachael Arauz holds a PhD in art history from the University of Pennsylvania and has worked as an independent curator of modern and American art since 2002.

"Churning out “great art” was not, finally, the school’s main contribution. What was created during those short, sweet summers had more to do with the very conditions of creativity. It was something more mercurial and harder to pin down but — on all the evidence presented by this show and its excellent catalogue — very, very enviable."
— The Wall Street Journal

"The authors, who are both curators of American art, deliver the only complete retrospective of Haystack. No other scholarly literature exists on Haystack’s foundational years or on the connection of the artists that were essential to the early leadership of the school. This publication is recommended for all academic art libraries and essential for any school with a decorative arts or a master of arts program."
— ARLIS/NA Reviews
or support indie stores by buying on
Copyright © 2020 American Booksellers Association