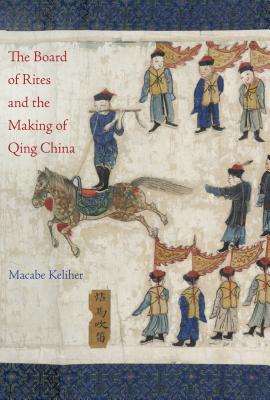 The Board of Rites and the Making of Qing China

The Board of Rites and the Making of Qing China presents a major new approach in research on the formation of the Qing empire (1636–1912) in early modern China. Focusing on the symbolic practices that structured domination and legitimized authority, the book challenges traditional understandings of state-formation, and argues that in addition to war making and institution building, the disciplining of diverse political actors, and the construction of political order through symbolic acts were essential undertakings in the making of the Qing state. Beginning in 1631 with the establishment of the key disciplinary organization, the Board of Rites, and culminating with the publication of the first administrative code in 1690, Keliher shows that the Qing political environment was premised on sets of intertwined relationships constantly performed through acts such as the New Year’s Day ceremony, greeting rites, and sumptuary regulations, or what was referred to as li in Chinese. Drawing on Chinese- and Manchu-language archival sources, this book is the first to demonstrate how Qing state-makers drew on existing practices and made up new ones to reimagine political culture and construct a system of domination that lay the basis for empire.

"[Keliher] has produced an extremely valuable and well-balanced work that will stand the test of time."
— China Review International

Macabe Keliher is Assistant Professor of History at Southern Methodist University.
Loading...
or support indie stores by buying on