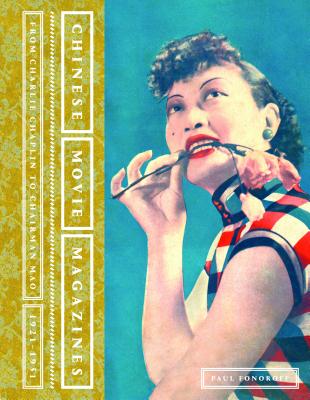 Showcasing an exotic, eclectic, and rare array of covers from more than five hundred movie publications from a glamorous bygone age, Chinese Movie Magazines sheds fresh light on China’s film industry during a transformative period of its history. Expertly curated by collector and Chinese cinema specialist Paul Fonoroff, this volume provides insightful commentary relating the magazines to the times in which they were created, embracing everything from cinematic trends to politics and world events, along with gossip, fashion, and pop culture.

"What a vintage year for coffee table books with a Chinese angle. Top of the pile should be Paul Fonoroff’s beautiful Chinese Movie Magazines: From Charlie Chaplin to Chairman Mao 1921-1951. A gargantuan Technicolor feast of Shanghai starlets and stylish movie posters."
— Los Angeles Review of Books

"China is not only one of the world’s biggest film markets, it’s home to generations of cinema fans, as Paul Fonoroff’s Chinese Movie Magazines: From Charlie Chaplin to Chairman Mao, 1921-1951, beautifully demonstrates."
— Los Angeles Times

"The beautifully embossed volume of more than 500 magazine covers...was curated with lively writing by Fonoroff, a film critic for the South China Morning Post in Hong Kong since 1988."
— China Daily

"Chinese Movie Magazines is a treat, not only since every page includes color images of movie magazine covers, but also for the telling of modern Chinese history through the covers and the text provided by Fonoroff. This hardcover volume of high-quality reproductions is rounded off with a fabric cover over the spine."
— Asian Review of Books

"Chinese Movie Magazines represents the fruit of his labours: a collection of more than 500 magazine covers that offer a vivid visual record of "tumultuous times" in China – technological, social, and political."
— The Telegraph

Paul Fonoroff has been based in Hong Kong since 1983 and is the film critic for the South China Morning Post. He has hosted over a thousand movie-related TV shows in Cantonese, Mandarin, and English. He is a member of the Hong Kong Film Critics Society and the Performing Artists Guild of Hong Kong and is an advisor to the Hong Kong Film Archives. He is the author of At the Hong Kong Movies and Silver Light.
Loading...
or support indie stores by buying on