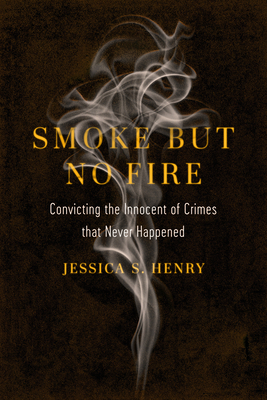 Smoke but No Fire

Convicting the Innocent of Crimes that Never Happened

2020 Foreword INDIES Book of the Year Awards Winner, Silver (Political and Social Sciences)
Winner of the Montaigne Medal, awarded to "the most thought-provoking books"


The first book to explore a shocking yet all-too-common type of wrongful conviction—one that locks away innocent people for crimes that never actually happened.

Rodricus Crawford was convicted and sentenced to die for the murder by suffocation of his beautiful baby boy. After years on death row, evidence confirmed what Crawford had claimed all along: he was innocent, and his son had died from an undiagnosed illness.  Crawford is not alone. A full one-third of all known exonerations stem from no-crime wrongful convictions.


The first book to explore this common but previously undocumented type of wrongful conviction, Smoke but No Fire tells the heartbreaking stories of innocent people convicted of crimes that simply never happened. A suicide is mislabeled a homicide. An accidental fire is mislabeled an arson. Corrupt police plant drugs on an innocent suspect.  A false allegation of assault is invented to resolve a custody dispute. With this book, former New York City public defender Jessica S. Henry sheds essential light on a deeply flawed criminal justice system that allows—even encourages—these convictions to regularly occur. Smoke but No Fire promises to be eye-opening reading for legal professionals, students, activists, and the general public alike as it grapples with the chilling reality that far too many innocent people spend real years behind bars for fictional crimes.


Praise For Smoke but No Fire: Convicting the Innocent of Crimes that Never Happened…

"The author's accumulation of evidence is revelatory. An eye-opening book that suggests how commonplace are miscarriages of justice in the U.S."
— Kirkus Reviews

“Jessica Henry provides a concise and even-handed account of no-crime convictions and the numerous, interdependent ways in which they are allowed to continue. Her ability to weave personal stories with the matter of (legal) fact writing beautifully illustrates a perfectly ugly scenario. . . . The book is an informative and interesting read that also provides a great starting point for anyone who may want to further investigate this miscarriage of criminal justice.”
— Crime, Law and Social Change

"Smoke but No Fire is an engaging read that offers a damning indictment of the American criminal justice system and its pervasive indifference to the possibility of innocence."
— Wrongful Conviction Law Review

"Smoke but No Fire is groundbreaking and frightening. . . . This book lays bare the deepest and darkest dysfunction within the criminal legal system and helps us understand what we can do about it."
— The Champion

"The book allows the reader a bit of hope, which is both cautiously optimistic and deliberately realistic. Henry provides a number of recommendations for reform that do not push the bounds of reality but instead focus on incremental and achievable success."

Jessica S. Henry was a public defender for nearly ten years in New York City before joining the Department of Justice Studies at Montclair State University, where she is Professor and a frequent commentator on national television, on radio, and in print media.