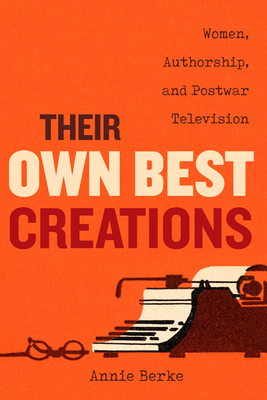 Their Own Best Creations

A rich account that combines media-industry history and cultural studies, Their Own Best Creations looks at women writers' contributions to some of the most popular genres of postwar TV: comedy-variety, family sitcom, daytime soap, and suspense anthology. During the 1950s, when the commercial medium of television was still being defined, women writers navigated pressures at work, constructed public personas that reconciled traditional and progressive femininity, and asserted that a woman's point of view was essential to television as an art form. The shows they authored allegorize these professional and personal pressures and articulate a nascent second-wave feminist consciousness. Annie Berke brings to light the long-forgotten and under-studied stories of these women writers and crucially places them in the historical and contemporary record.

Annie Berke is a scholar of American film and broadcasting whose writing on women in television has appeared in Camera Obscura: Feminism, Culture, and Media Studies, Flow, and Feminist Media Histories. She is currently Film Editor for the LA Review of Books.
Loading...
or support indie stores by buying on