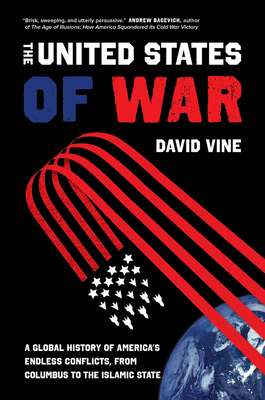 The United States of War

A Global History of America's Endless Conflicts, from Columbus to the Islamic State (California Series in Public Anthropology #48)

A provocative examination of how the U.S. military has shaped our entire world, from today’s costly, endless wars to the prominence of violence in everyday American life.

The United States has been fighting wars constantly since invading Afghanistan in 2001. This nonstop warfare is far less exceptional than it might seem: the United States has been at war or has invaded other countries almost every year since independence. In The United States of War, David Vine traces this pattern of bloody conflict from Columbus's 1494 arrival in Guantanamo Bay through the 250-year expansion of a global U.S. empire. Drawing on historical and firsthand anthropological research in fourteen countries and territories, The United States of War demonstrates how U.S. leaders across generations have locked the United States in a self-perpetuating system of permanent war by constructing the world’s largest-ever collection of foreign military bases—a global matrix that has made offensive interventionist wars more likely. Beyond exposing the profit-making desires, political interests, racism, and toxic masculinity underlying the country’s relationship to war and empire, The United States of War shows how the long history of U.S. military expansion shapes our daily lives, from today’s multi-trillion–dollar wars to the pervasiveness of violence and militarism in everyday U.S. life. The book concludes by confronting the catastrophic toll of American wars—which have left millions dead, wounded, and displaced—while offering proposals for how we can end the fighting.

Praise For The United States of War: A Global History of America's Endless Conflicts, from Columbus to the Islamic State (California Series in Public Anthropology #48)…

"A wide-ranging survey of the American way of war, expensive and incessant, in support of an empire we’re not supposed to have. . . . Vine offers much to ponder about our militarized foreign policy and its deep antecedents."
— Kirkus Reviews

"Military expansion, war without end, and the pervasiveness of violence in American lives: Vine offers countless insights into this uniquely American way of war."

"While the idea that the global expansion of military bases corresponds with the rise of US empire may seem obvious, this book convincingly shows that it is both consequence and cause. Vine brilliantly documents the way widespread global military positions—which are always sold to the public as defensive—are, by their very nature, offensive and become their own self-fulfilling ecosystems of conquest. . . . One walks away convinced that the US empire and its global network of bases must be dismantled if we are to have any hope of putting a stop to the devastating cycle of endless US wars and meddling."
— Jacobin

“I hope every person on earth reads The United States of War.”
— War is a Crime

"Provides a comprehensive history of Washington’s quest for empire. . . . The United States of War is a unique history text. Convincing in its portrayal of US military bases as both the outposts of empire and the remote supplier to the troops whose mission is to maintain and expand that empire, the timeline the author constructs is one that argues the US has always been an imperial nation—and not by some accident or circumstance of history."

"A sweeping indictment of the nation’s heavily militarized foreign policy, including the nearly incalculable costs, financial as well as moral, that have been exacted both at home and abroad. . . . The definitive account of the history of U.S. overseas bases and their role in the history of American militarism."

“Revelatory. . . . By identifying the link between bases and war, Vine has found a simple and possibly powerful lever with which to move . . . large structural forces. You want peace? Close the bases. Fewer overseas outposts would mean fewer provocations for foreign anger, fewer targets for attacks, and fewer inducements for Washington to solve its problems by using force.”
— Daniel Immerwahr,

"Wonderful and disturbing. . . . Encyclopedic in its coverage. . . . I highly recommend the book. It roused even me, a lifetime pacifist and antiwar activist, to increased awareness of the profound extent and impact of US bases and wars on both the United States and the rest of the world. The book is an extremely useful (and therefore very depressing) compendium of what can rightfully be called the US war machine and empire."

"David Vine’s book, enriched by a series of maps, is not just a history book based on a mere chronological sequence of events. It also gives voice to some of the people who were affected by US expansionist policy. The interviews collected during many years of research make this book an important resource not only for all scholars interested in geopolitics and US history, but also for all people who want to understand the reason for so many conflicts around the world and the evolution of American imperialism."

"Make[s] it quite clear that war on other peoples and nations is the defining element of the United States, its past, its present and probably its future. It’s a very tall order, but Vine makes it clear that preventing US wars overseas begins by closing US bases overseas."

David Vine is Professor of Anthropology at American University. His other books include Base Nation: How U.S. Military Bases Abroad Harm America and the World and Island of Shame: The Secret History of the U.S. Military Base on Diego Garcia.
Loading...
or support indie stores by buying on