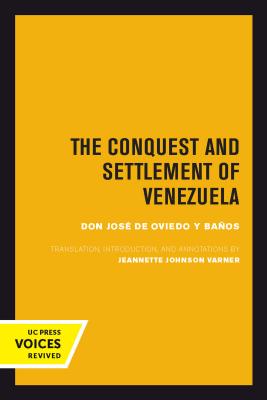 The Conquest and Settlement of Venezuela

This classic in the literature of the European exploration and settlement of the New World has never until now been available in the English language. Its author, born in 1671, was descended from a noble Spanish family and was a learned and influential member of Caracas society. His Historia de la conquista y poblacion de la provincia de Venezuela is widely regarded as a literary masterpiece and a major historical work. It has been read and acclaimed throughout the world. Jeannette Varner's sensitive translation will be welcomed by English-speaking Latin Americanists everywhere. The work is an accurate and absorbing narration of the early history of Venezuela, from Christopher Columbus's arrival on August 1, 1498, on his third voyage to the New World, until its sack by the British corsair, Sir Francis Drake, at the end of the sixteenth century. Based firmly on the histories of official chroniclers and early historians of Venezuela, its first four book are a matchless introduction to the subject and provide valuable background for scholarly study. The last three books, dealing with the bloody struggle for the domination of Caracas and its vicinity, constitute Oviedo's original contribution to the history of Venezuela. Widely divergent subject matter ranges from the ghastly crimes of the tyrant Lope de Aguirre, who murdered both his priest and his daughter, to the mystic transfiguration of Martin Tinajero, whose body attracted swarms of wild bees with its odor of honey. In his Letras y hombres de Venezuela, Arturo Uslar Pietri calls the book a "song of pride in race and love of the land, an elegy full of sentiment and melody."

This title is part of UC Press's Voices Revived program, which commemorates University of California Press’s mission to seek out and cultivate the brightest minds and give them voice, reach, and impact. Drawing on a backlist dating to 1893, Voices Revived makes high-quality, peer-reviewed scholarship accessible once again using print-on-demand technology. This title was originally published in 1987.

Jeannette Johnson Varner, writer, translator, and editor, was formerly Head of Reference at the Austin Public Library in Texas.
Loading...
or support indie stores by buying on