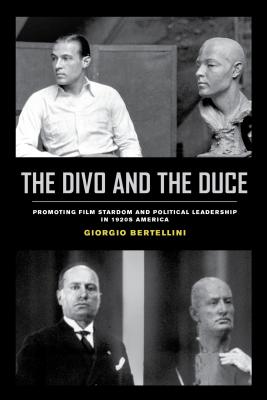 The Divo and the Duce

In the post–World War I American climate of isolationism, nativism, democratic expansion of civic rights, and consumerism, Italian-born star Rodolfo Valentino and Italy’s dictator Benito Mussolini became surprising paragons of authoritarian male power and mass appeal. Drawing on extensive archival research in the United States and Italy, Giorgio Bertellini’s work shows how their popularity, both political and erotic, largely depended on the efforts of public opinion managers, including publicists, journalists, and even ambassadors. Beyond the democratic celebrations of the Jazz Age, the promotion of their charismatic masculinity through spectacle and press coverage inaugurated the now-familiar convergence of popular celebrity and political authority.

This is the first volume in the new Cinema Cultures in Contact series, coedited by Giorgio Bertellini, Richard Abel, and Matthew Solomon.


Praise For The Divo and the Duce: Promoting Film Stardom and Political Leadership in 1920s America (Cinema Cultures in Contact #1)…

"There have been many studies of Benito Mussolini and Rudolph Valentino but The Divo and the Duce brings them together as celebrities whose seductive masculinity made a huge impact in the United States as well as in Italy. It brings together cinema studies and politics with particular attention to the role of spin doctors, public relations people, biographers, newspapers and radio."
— Sydney Morning Herald

"The result of more than a decade of extensive archival research by Bertellini. . . . This meticulously researched study is recommended for specialized film and history collections."
— CHOICE

"Remarkably original research. . . . The Divo and the Duce is a monumental labor of passion and intellect that delves deep into the archives to analyze the compelling mediatic convergences emerging in the twentieth century in the promotion of both celebrity and political authority. Given its breadth, lively narration, and arresting illustrations, audiences well beyond academia will find it a rewarding and relevant read."
— Journal of Italian Cinema & Media Studies

" A well-researched and compelling book that astutely connects politics and film in the 1920s. . . . The Divo and the Duce makes a powerful case for why we need to take entertainment seriously to understand fully political history."
— H-Italy / H-Net

"At a moment in which public debates revolve around social media, celebrities, and unrestrained political leaders, and too many discussions turn the link between populism and mass communications tedious and repetitive, it is surprising to note that some of these features were already in place in the 1920s. . . . Giorgio Bertellini tells this story, and in quite convincing ways."
— Il Manifesto

"The Divo and the Duce has the merit of discussing the titular case studies by moving beyond the distinction between film and political history, and proposes a comparative approach, so far unprecedented, that goes way beyond mere filmographic anecdotes."
— Cinergie

“The weight of politics contemporary America cannot be evaded in this book, and Bertellini shows skillfully . . . that the power of culture of celebrities in American politics forms a clear and frightening chain from Mussolini to Trump. As such, the book should be read with great attention.”
— Italia Contemporanea

"Making detailed use of both film history and political theory, Bertellini’s study is particularly timely, for it arrives at a moment of heightened awareness of how deeply inflected American life is by the convergence of celebrity, media, and politics."
— Iperstoria

"The Divo and the Duce is the result of impressive archival research and Bertellini’s skilful application of a diverse range of theoretical frames and historical perspectives. . . . Alternating his analyses between close-ups on key protagonists and panoramic views of film and political histories, Bertellini offers a truly innovative and distinctive approach to studying the relationship between celebrity culture and political leadership."

"By interlacing the public figures of Valentino and Mussolini, The Divo and the Duce unveils the interdependence of romantic and political leadership during the 1920s. In this sense, not only does Bertellini’s work shed light on these two case studies, but it also opens up new fields of enquiry for further investigation."

Giorgio Bertellini is Professor of Film and Media History at the University of Michigan. He is the author and editor of the award-winning volumes Italy in Early American Cinema: Race, Landscape, and the Picturesque and Italian Silent Cinema: A Reader.
Loading...
or support indie stores by buying on