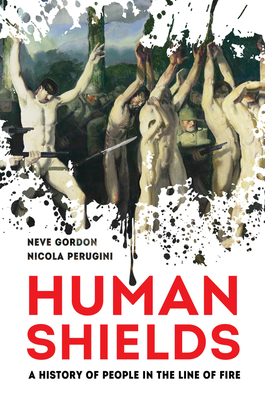 A History of People in the Line of Fire

A chilling global history of the human shield phenomenon.

From Syrian civilians locked in iron cages to veterans joining peaceful indigenous water protectors at the Standing Rock Sioux Reservation, from Sri Lanka to Iraq and from Yemen to the United States, human beings have been used as shields for protection, coercion, or deterrence. Over the past decade, human shields have also appeared with increasing frequency in antinuclear struggles, civil and environmental protests, and even computer games. The phenomenon, however, is by no means a new one.

Describing the use of human shields in key historical and contemporary moments across the globe, Neve Gordon and Nicola Perugini demonstrate how the increasing weaponization of human beings has made the position of civilians trapped in theaters of violence more precarious and their lives more expendable. They show how the law facilitates the use of lethal violence against vulnerable people while portraying it as humane, but they also reveal how people can and do use their own vulnerability to resist violence and denounce forms of dehumanization. Ultimately, Human Shields unsettles our common ethical assumptions about violence and the law and urges us to imagine entirely new forms of humane politics.

Neve Gordon is Professor of Human Rights and the Politics of Humanitarian Law at Queen Mary University of London. He is the author of Israel’s Occupation and coauthor of The Human Right to Dominate.

Nicola Perugini is Senior Lecturer in International Relations at the University of Edinburgh. He is the coauthor of The Human Right to Dominate.