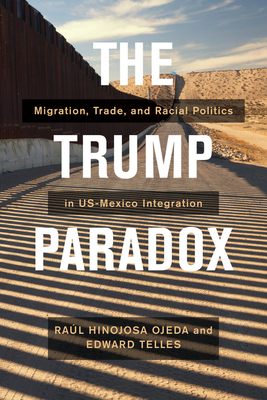 The Trump Paradox: Migration, Trade, and Racial Politics in US-Mexico Integration explores one of the most complex and unequal cross-border relations in the world, in light of both a twenty-first-century political economy and the rise of Donald Trump. Despite the trillion-plus dollar contribution of Latinos to the US GDP, political leaders have paradoxically stirred racial resentment around immigrants just as immigration from Mexico has reached net zero. With a roster of state-of-the-art scholars from both Mexico and the US, The Trump Paradox explores a dilemma for a divided nation such as the US: in order for its economy to continue flourishing, it needs immigrants and trade.

Praise For The Trump Paradox: Migration, Trade, and Racial Politics in US-Mexico Integration…

“This is a big book––not so much in length, but in the breadth of coverage, depth of analysis, and gravitas of its contributors. . . . a thoughtfully organized edited volume examining the paradoxes associated with Trump’s pronounced opposition to migration from, and trade with, Mexico.”
— Ethnic and Racial Studies

Raúl Hinojosa Ojeda is Associate Professor in the UCLA César E. Chávez Department of Chicana/o and Central American Studies and is the founder and director of the UCLA North American Integration and Development Center.

Edward Telles is Distinguished Professor of Sociology and director of the Center for Research on International Migration at UC Irvine.