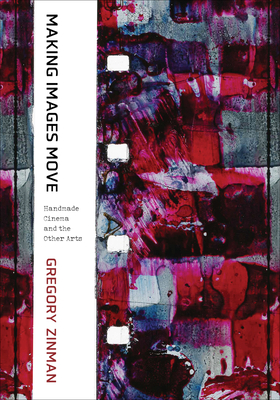 Handmade Cinema and the Other Arts

Making Images Move reveals a new history of cinema by uncovering its connections to other media and art forms. In this richly illustrated volume, Gregory Zinman explores how moving-image artists who worked in experimental film pushed the medium toward abstraction through a number of unconventional filmmaking practices, including painting and scratching directly on the film strip; deteriorating film with water, dirt, and bleach; and applying materials such as paper and glue. This book provides a comprehensive history of this tradition of “handmade cinema” from the early twentieth century to the present, opening up new conversations about the production, meaning, and significance of the moving image. From painted film to kinetic art, and from psychedelic light shows to video synthesis, Gregory Zinman recovers the range of forms, tools, and intentions that make up cinema’s shadow history, deepening awareness of the intersection of art and media in the twentieth century, and anticipating what is to come.

Praise For Making Images Move: Handmade Cinema and the Other Arts…

"Written with careful precision and breadth. . . chronicling a rich, 100-year history of handmade moviemaking in which artists similarly trespass into other areas of creative practice."
— Los Angeles Review of Books

"Gregory Zinman’s excellent new book on movies made (or remade) through the direct, often tactile engagement of artists and their filmstrips, video-feedback loops, and myriad other animated oozes and vibrant viscosities, Making Images Move: Handmade Cinema and the Other Arts is everything one wants in this age of over-scribbling at the margins of cinema. Lucid, smart, but entirely readable, and compellingly illuminated with color illustrations of the wonders it describes."
— Cinema Scope Magazine

"Devoid of zeitgeisty romanticizations of the analog, Gregory Zinman's Making Images Move presents a defiant yet clear-eyed alternative history of the origins of cinema. . . . Zinman's prose sparkles in recounting artists' use of chemicals, bodily fluids, and elements like wind and water, which often render celluloid fragile or ephemeral."
— Film Comment

"Zinman’s is the book perched on our balconies. It is worth way more than two in the bush. That’s the great thing about books that are also birds. Their singleness multiplies in hands that hold them. Running fingers through their feathered figures to thread additional ones in responds to their song."
— Critical Inquiry

"Zinman explores the history of camera-less filmmaking in an exciting intervention that ennobles an underdiscussed mode of film production and challenges our very conception of what constitutes a 'movie.' . . . A groundbreaking immersion into a previously uncelebrated filmmaking practice."
— Historical Journal of Film, Radio and Television

"Rather than manifesting a site of contestation between painting, film, sculpture, or photography, Making Images Move espouses the handmade's medium-collaborative impulse through material investigations of light in time. . . . Though Zinman situates the return to craft as a response to mass digitization, the current pandemic transfigures Zinman's politics of handmade joy into something almost elegiac, as even the possibility of direct artistic experience remains untenable."
— Millennium Film Journal

Gregory Zinman is Assistant Professor of Film and Media in the School of Literature, Media, and Communication at the Georgia Institute of Technology and is a coeditor, with John Hanhardt and Edith Decker-Phillips, of We Are in Open Circuits: Writings by Nam June Paik.
Loading...
or support indie stores by buying on