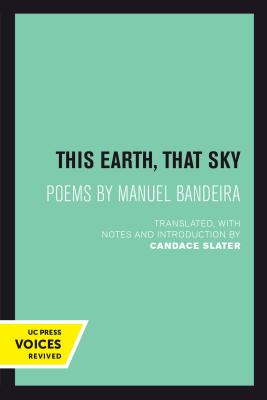 This Earth, That Sky

This is a generous, long-overdue presentation of the major Brazilian poet Manuel Bandeira (1886–1968) to the English-speaking reader. Well over a hundred poems appear here in both Portuguese and English, together with a critical overview that introduces the poet and Brazilian poetry to the nonspecialist and contributes significantly to the existing body of Bandeira scholarship.

Bandeira’s poetry not only stands among the most important in twentieth-century Brazil but also embodies the experience of transition from one literary movement to another. The poems span a half century of writing, from the publication of Bandeira’s first book in 1917 to the definitive edition of his collected work in 1966. Because critics agree that the poet’s most influential creative efforts began in 1930 with the publication of Libertinagem (Libertinism), the collection concentrates on the later period. A smaller number of poems drawn from the three books published before this date provide a useful basis for comparison.

Candace Slater’s fine versions of the poems are augmented by a translator’s note that considers Bandeira’s poetic language in terms of the particular challenges it offers the translator into English. Her introduction offers a fresh and comprehensive look at the poet whose artistic transformation from nineteenth-century modes of expression to experimental twentieth-century Modernism paralleled the transformation of his country. It focuses on the poet’s continuing alternation between an acceptance of, if not allegiance to, the material world and a desire for something more. This fundamental though often subtle opposition is reflected in the title, This Earth, That Sky.
This title is part of UC Press's Voices Revived program, which commemorates University of California Press’s mission to seek out and cultivate the brightest minds and give them voice, reach, and impact. Drawing on a backlist dating to 1893, Voices Revived makes high-quality, peer-reviewed scholarship accessible once again using print-on-demand technology. This title was originally published in 1989.

Candace Slater is Professor of Spanish and Portuguese at the University of California, Berkeley.
Loading...
or support indie stores by buying on