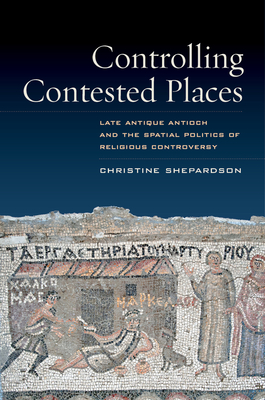 Late Antique Antioch and the Spatial Politics of Religious Controversy

From constructing new buildings to describing rival-controlled areas as morally and physically dangerous, leaders in late antiquity fundamentally shaped their physical environment and thus the events that unfolded within it. Controlling Contested Places maps the city of Antioch (Antakya, Turkey) through the topographically sensitive vocabulary of cultural geography, demonstrating the critical role played by physical and rhetorical spatial contests during the tumultuous fourth century. Paying close attention to the manipulation of physical places, Christine Shepardson exposes some of the powerful forces that structured the development of religious orthodoxy and orthopraxy in the late Roman Empire.

Theological claims and political support were not the only significant factors in determining which Christian communities gained authority around the Empire. Rather, Antioch’s urban and rural places, far from being an inert backdrop against which events transpired, were ever-shifting sites of, and tools for, the negotiation of power, authority, and religious identity. This book traces the ways in which leaders like John Chrysostom, Theodoret, and Libanius encouraged their audiences to modify their daily behaviors and transform their interpretation of the world (and landscape) around them. Shepardson argues that examples from Antioch were echoed around the Mediterranean world, and similar types of physical and rhetorical manipulations continue to shape the politics of identity and perceptions of religious orthodoxy to this day.

"Shepardson offers a compelling and insightful take on the transformation of the empire’s cultural terrain in the decades after Constantine’s conversion and the Nicene Council."
— CHOICE

"The synthesis presented in Controlling Contested Places is exciting and very welcome ... [Shepardson’s] work provides a clear template for further inquiry about geography and memory beyond Antioch in the world of Late Antiquity, and useful tools to address them."
— Edward Schoolman

"S. has the ability to take complex concepts in spatial theory and apply them creatively to ancient contexts without burdening the reader with dense theoretical jargon, adding thus both strength and clarity to her arguments, and also making the book accessible to not only specialists in the field—who will certainly find her applications intriguing—but also intermediate students of Late Antiquity."
— Vigiliae Christianae

Christine Shepardson is Lindsay Young Professor of Religious Studies at the University of Tennessee, Knoxville.
Loading...
or support indie stores by buying on