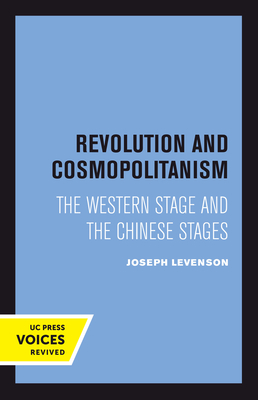 The Western Stage and the Chinese Stages

In 1965, Joseph R. Levenson began working on a new trilogy to follow his earlier study of modern Chinese intellectual history, Confucian China and Its Modern Fate. By 1969, he had already sketched out basic outlines of the work, which was to be called Provincialism, Nationalism, and Cosmopolitanism. It was to consist of three volumes: one sounding the general themes of the arrangement, and two other elaborating its motifs. Accidental death tragically cut short Levenson's life and the preparation of the work. He did leave behind, however, an embryo of it in the form of this book, Revolution and Cosmopolitanism.
Based upon a careful analysis of a wide selection of Western plays translated into Chinese during the twentieth century, Revolution and Cosmopolitanism tries to set the Communist Cultural Revolution into a new kind of historical perspective. Beginning with the demise of a Confucian China which "new youth" intellectuals found too provincial for their palates, Levenson shows how those same cosmopolitans in the 1920s and 1920s damed later Communist intellectuals of the 1950s for being to receptive to non-Chinese values. As Red Guards attacked symbols of a feudal Confucian past and a bourgeois foreign present, China slipped into a new sort of provincialism. Levenson analyzes their transformation with profound subtlety. Convinced that revolutionary China cannot forever seal itself off from universal cosmopolitan influences, he expresses sympathy throughout with the dilemma of rootless intellectuals in a society searching for a particular non-intellectual identity.
This title is part of UC Press's Voices Revived program, which commemorates University of California Press’s mission to seek out and cultivate the brightest minds and give them voice, reach, and impact. Drawing on a backlist dating to 1893, Voices Revived makes high-quality, peer-reviewed scholarship accessible once again using print-on-demand technology. This title was originally published in 1971.

The late Joseph Levenson was Sather Professor of History at the University of Calfiornia, Berkeley, and the author of Liang Ch'i-ch'ao and the Mind of Modern China, Confucian China and Its Modern Fate: A Trilogy, and (with Franz Schurmann) China: An Interpretive History.

Frederic E. Wakeman, Jr., a former student of Joseph Levenson was a member of the Department of History at the University of California, Berkeley.