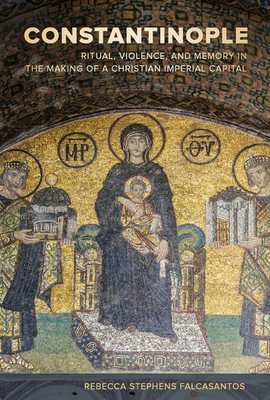 Ritual, Violence, and Memory in the Making of a Christian Imperial Capital (Christianity in Late Antiquity #9)

As Christian spaces and agents assumed prominent positions in civic life, the end of the long span of the fourth century was marked by large-scale religious change. Churches had overtaken once-thriving pagan temples, old civic priesthoods were replaced by prominent bishops, and the rituals of the city were directed toward the Christian God. Such changes were particularly pronounced in the newly established city of Constantinople, where elites from various groups contended to control civic and imperial religion.

Rebecca Stephens Falcasantos argues that imperial Christianity was in fact a manifestation of traditional Roman religious structures. In particular, she explores how deeply established habits of ritual engagement in shared social spaces—ones that resonated with imperial ideology and appealed to the memories of previous generations—constructed meaning to create a new imperial religious identity. By examining three dynamics—ritual performance, rhetoric around violence, and the preservation and curation of civic memory—she distinguishes the role of Christian practice in transforming the civic and cultic landscapes of the late antique polis.

Rebecca Stephens Falcasantos is Assistant Professor of Religion at Amherst College. Her research focuses on the intersection of religious practices, rhetoric, and contestations over cultural dominance in the late Roman East.
Loading...
or support indie stores by buying on