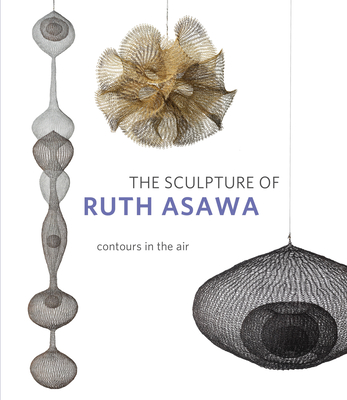 Contours in the Air

An expanded edition of the definitive book on Ruth Asawa’s fascinating life and her lasting contributions to American art.

The work of American artist Ruth Asawa (1926–2013) is brought into brilliant focus in this definitive book, originally published to accompany the first complete retrospective of Asawa’s career, organized by the Fine Arts Museums of San Francisco in 2006. This new edition features an expanded collection of essays and a detailed illustrated chronology that explore Asawa's fascinating life and her lasting contributions to American art. Beginning with her earliest works—drawings and paintings created in the 1940s while she was studying at Black Mountain College—this beautiful volume traces Asawa’s flourishing career in San Francisco and her trajectory as a pioneering modernist sculptor who is recognized internationally for her innovative wire sculptures, public commissions, and activism on behalf of public arts education.

Through her lifelong experimentations with wire, especially its capacity to balance open and closed forms, Asawa invented a powerful vocabulary that contributed a unique perspective to the field of twentieth-century abstract sculpture. Working in a variety of nontraditional media, Asawa performed a series of remarkable metamorphoses, leading viewers into a deeper awareness of natural forms by revealing their structural properties. Through her art, Asawa transfigured the commonplace into metaphors for life processes themselves. The Sculpture of Ruth Asawa establishes the importance of Asawa’s work within a larger cultural context of artists who redefined art as a way of thinking and acting in the world, rather than as merely a stylistic practice.

Published in association with the Fine Arts Museums of San Francisco (FAMSF).

Praise For The Sculpture of Ruth Asawa, Second Edition: Contours in the Air…

"The revised edition of The Sculpture of Ruth Asawa: Contours in the Air, a copious catalog first published in 2006 . . . offers stunning images of Asawa’s work. The essays here provide a fuller picture of the artist’s time at Black Mountain; the racial prejudices she encountered in her early life; her public commissions; her prints and drawings, which often display her more fantastical side; and her relationship with [Imogen] Cunningham, an early neighbor whose son worked for Lanier’s firm. . . . A fitting homage to this remarkable woman."

"Together this publication and the exhibition [it coincided with] serve to reinforce this important artist’s work in the history of American modernism."
— Art Daily

“Published to accompany the first complete retrospective of her career, The Sculpture of Ruth Asawa: Contours in the Air is a superb accomplishment. The book examines her pioneering modernist contributions and convinces the reader that Asawa’s work is well-deserving of the wide recognition it has received."
— Leonardo Reviews

"A retrospective exhibition in 2007, and the accompanying catalog . . . . help[ed] relocate Asawa as an important figure in post-war American art."
— Interior Design

“The first major efforts to reevaluate the art of Ruth Asawa. . . . This catalog will serve to give weight and purpose to Asawa’s lifetime of creative experimentation.”
— Woman’s Art Journal

"The Sculpture of Ruth Asawa provides considerable and useful detail on her background, training, working processes, and community involvement."
— Textile: Cloth and Culture

"A definitive collection of material on and about the artist."
— Rain Taxi Review of Books

Timothy Anglin Burgard is Distinguished Senior Curator and Ednah Root Curator in Charge of American Art, Fine Arts Museums of San Francisco, and the author or coauthor of seventeen books, including Richard Diebenkorn: The Berkeley Years, 1953–1966 and Revelations: Art from the African American South.

Daniell Cornell is an independent arts professional, curator, and educator who has held positions at the Fine Arts Museums of San Francisco; the New Museum, New York; Yale University Art Gallery, New Haven, Connecticut; and, most recently, the Palm Springs Art Museum as the Donna and Cargill MacMillan Director of Art.