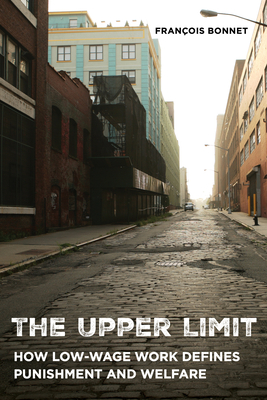 Since 1993, crime in the United States has fallen to historic lows, seeming to legitimize the country’s mix of welfare reform and mass incarceration. The Upper Limit explains how this unusual mix came about, examining how, beginning in the 1970s, declining living standards for the poor have defined social and penal policy in the United States, making welfare more restrictive and punishment harsher. François Bonnet shows how low-wage work sets the upper limit of social and penal policy, where welfare must be less attractive than low-wage work and criminal life must be less attractive than welfare. In essence, the living standards of the lowest class of workers in a society determine the upper limit for the generosity of welfare and for the humanity of punishment in that society. The Upper Limit explores the local consequences of this punitive adjustment in East New York, a Brooklyn neighborhood where crime fell in the 1990s. Bonnet argues that no meaningful penal reform can happen unless living standards and the minimum wage rise again. Enlightening and provocative, The Upper Limit provides a comprehensive theory of the evolution of social and penal policy.

François Bonnet is Research Fellow in Sociology and Political Science at CNRS, the French National Center for Scientific Research.