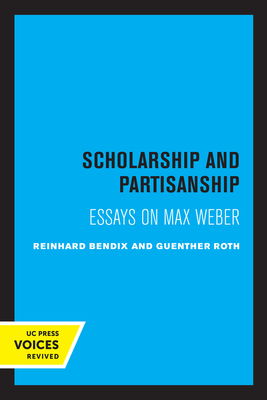 Today, Max Weber appears to many younger academic rebels as the patron sait of "value neutral" social science, yet he too engaged in a furious generational rebellion of his own, and in the end chose science as a vocation.
These essays deal with Weber's substantive and methodological contribution and the relation of his life to his place in intellectual and political history. They examine the influences on Weber, as well as his similarities to and differences from Marx, Burckhardt, Nietzsche, Durkheim, and others. The authors also give attention to the ideological background of the modern attack upon the university, and to comparative study of values, authority, and legitimation. Bendix's Presidential Address to the 1970 meeting of the American Sociological Association is included.
This title is part of UC Press's Voices Revived program, which commemorates University of California Press's mission to seek out and cultivate the brightest minds and give them voice, reach, and impact. Drawing on a backlist dating to 1893, Voices Revived makes high-quality, peer-reviewed scholarship accessible once again using print-on-demand technology. This title was originally published in 1971.

Reinhard Bendix was Professor Emeritus of Sociology, University of California, Berkeley. Guenther Roth was Professor of Sociology at Columbia University. Many of his publications have dealt with the theoretical significance of Max Weber’s oeuvre and its empirical utility in historical and contemporary research. Since his retirement in 1997, he has published mainly as a political and social historian.
or support indie stores by buying on