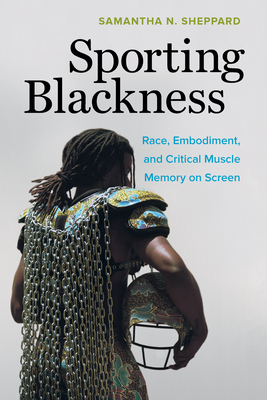 Sporting Blackness examines issues of race and representation in sports films, exploring what it means to embody, perform, play out, and contest blackness by representations of Black athletes on screen. By presenting new critical terms, Sheppard analyzes not only “skin in the game,” or how racial representation shapes the genre’s imagery, but also “skin in the genre,” or the formal consequences of blackness on the sport film genre’s modes, codes, and conventions. Through a rich interdisciplinary approach, Sheppard argues that representations of Black sporting bodies contain “critical muscle memories”: embodied, kinesthetic, and cinematic histories that go beyond a film’s plot to index, circulate, and reproduce broader narratives about Black sporting and non-sporting experiences in American society.

"Samantha N. Sheppard addresses the spectacle of blackness in sports as a sustained effort to challenge our amnesiac public discourse by creating a cinematic archive of black movement. . . .  Sporting Blackness offers a version of endurance — a capacity for sustaining movement together — that can help us remember, or even affect, how it all plays out."
— Los Angeles Review of Books

"Sheppard’s exploration of documentary sports films connects to how audiences view and understand contemporary Black athletes’ public articulations of dissent. Highlighting the real and perceived representations of Blackness expressed through film allows a recognition of the fundamental response to racial bias and antagonism that pervade sports; it also foregrounds the ways these portrayals articulate resistance to racial injustices."
— Public Books

"In her fusion of theories of race and blackness with her concept of critical muscle memory, Sheppard offers a new analytical paradigm applicable beyond the genre at the center of her study. . . . Sporting Blackness is packed with joy, resistance, and hope—much-needed attributes in this time."
— Film Quarterly

"Sporting Blackness represents a thoughtful, vibrant and absorbing contribution to our understanding of race, sport and media. . . .  As we look to make sense of the current racialized and racist world we live in, and facilitate our students to do the same, Sheppard’s outstanding book will no doubt prove to be an instructive and indispensable resource."
— Ethnic and Racial Studies

"Sporting Blackness, with its incisive close readings and its exciting weave of film-phenomenology, critical race theory and more, is an exemplary work of film studies that must surely influence much work to come."
— Visual Studies

Samantha N. Sheppard is the Mary Armstrong Meduski ’80 Assistant Professor of Cinema and Media Studies in the Department of Performing and Media Arts at Cornell University.