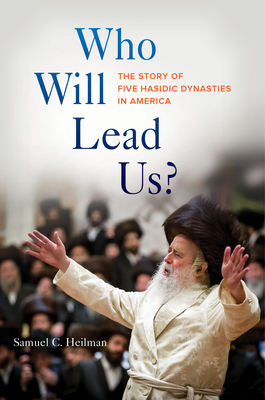 Who Will Lead Us?

The Story of Five Hasidic Dynasties in America

Hasidism, a movement many believed had passed its golden age, has had an extraordinary revival since it was nearly decimated in the Holocaust and repressed in the Soviet Union. Hasidic communities, now settled primarily in North America and Israel, have reversed the losses they suffered and are growing exponentially. With powerful attachments to the past, mysticism, community, tradition, and charismatic leadership, Hasidism seems the opposite of contemporary Western culture, yet it has thrived in the democratic countries and culture of the West. How? Who Will Lead Us? finds the answers to this question in the fascinating story of five contemporary Hasidic dynasties and their handling of the delicate issue of leadership and succession.

Revolving around the central figure of the rebbe, the book explores two dynasties with too few successors, two with too many successors, and one that believes their last rebbe continues to lead them even after his death. Samuel C. Heilman, recognized as a foremost expert on modern Jewish Orthodoxy, here provides outsiders with the essential guide to continuity in the Hasidic world.


Praise For Who Will Lead Us?: The Story of Five Hasidic Dynasties in America…

"One might expect to find these riveting succession stories—of the rebbes of the Munkacs, Boyan and Kopyczynitz, Bobover, Satmar, and Chabad Lubavitch dynasties—in a TV mini-series rather than in a work of sociology and history. While fueled by an enormous amount of research, they read more like page turners where the obsession is not sex, but succession."
— Moment

"An invaluable addition to the ranks of objective studies of a Jewish movement that continues to flourish in the U.S. even as more modern denominations decline."
— Publishers Weekly

“Heilman has drawn on many sources which he presents to us for the first time. He writes like a novelist thus making this a book that is hard to put down.”
— Reviews by Amos Lassen

"Anyone interested in Jewish history mixed with a bit of palace intrigue will enjoy this book.”

"Engrossing . . . . Required reading for anyone interested in the contemporary hasidic world."
— Seforim

"An in-depth analysis of how a very particular part of the Jewish world confronts modernity, post-Holocaust society, the modern nation-state of Israel, and a flourishing American Jewish community."
— CHOICE

"Who Will Lead Us? includes many great stories, all of them sharply and engagingly told. Heilman’s account of the fight over the leadership of the Bobovers (resolved after years of infighting by the New York State Supreme Court) is worth the price of the hard cover volume alone."
— Jewish Review of Books

"Once again, students of Judaism and religious traditionalism are indebted to Heilman for his brilliant and insightful work."
— Contemporary Jewry

"Anyone interested in Jewish history mixed with a bit of palace intrigue will enjoy this book."
— Jewish Book Review

“...Heilman’s wellspring of facts and tidbits conveys empathy and sympathy to the old/new Hasidic yore on the American shore bounded by memory, defined by family genetics, and guided by a religion of law. . . . This is a well-researched tome.”
— Reading Religion

"Fascinating. . . . This book is worthwhile for insights into these insular societies; societies that many may find inspiring."
— Association of Jewish Libraries Reviews

Samuel C. Heilman is Proshansky Chair in Jewish Studies at the Graduate Center and Distinguished Professor of Sociology at Queens College CUNY. He has written eleven books, including, most recently (with Menachem Friedman), The Rebbe: The Life and Afterlife of Menachem Mendel Schneerson, winner of the National Jewish Book Award.
Loading...
or support indie stores by buying on