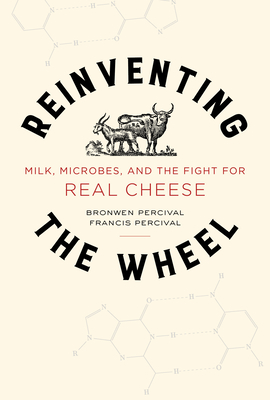 Milk, Microbes, and the Fight for Real Cheese (California Studies in Food and Culture #65)

In little more than a century, industrial practices have altered every aspect of the cheesemaking process, from the bodies of the animals that provide the milk to the microbial strains that ferment it. Reinventing the Wheel explores what has been lost as raw-milk, single-farm cheeses have given way to the juggernaut of factory production. In the process, distinctiveness and healthy rural landscapes have been exchanged for higher yields and monoculture. However, Bronwen and Francis Percival find reason for optimism. Around the world—not just in France, but also in the United States, England, and Australia—enterprising cheesemakers are exploring the techniques of their great-grandparents. At the same time, using sophisticated molecular methods, scientists are upending conventional wisdom about the role of microbes in every part of the world. Their research reveals the resilience and complexity of the indigenous microbial communities that contribute to the flavor and safety of cheese. One experiment at a time, these dynamic scientists, cheesemakers, and dairy farmers are reinventing the wheel.

Bronwen Percival is the cheese buyer at Neal’s Yard Dairy in London. She initiated the biennial Science of Artisan Cheese Conference and is cofounder of the website microbialfoods.org. In addition to serving on the editorial board of the Oxford Companion to Cheese, she has edited an English translation of the leading French textbook on raw-milk microbiology for cheesemakers.

Francis Percival writes on food and wine for The World of Fine Wine and was named Louis Roederer International Wine Columnist of the Year in 2013 and Pio Cesare Wine and Food Writer of the Year 2015. His work has also appeared in Culture, Decanter, Saveur, and the Financial Times. Together with Bronwen, he cofounded the London Gastronomy Seminars.


Praise For Reinventing the Wheel: Milk, Microbes, and the Fight for Real Cheese (California Studies in Food and Culture #65)…

"Provides input that is as valuable to a contemporary wine drinker as it may be to anyone interested in delicious cheese, or in personal health. . . .2017 Book of the Year”
— Wine & Spirits

"Not since Harold McGee’s monumental ‘On Food and Cooking’ (1984) and Sandor Katz’s masterly ‘The Art of Fermentation’ (2012) have I enjoyed and learned so much as I did from the Percivals’ book."

“This book should convince anyone that the making of wondrous cheeses is a science as well as an art.”

“Imperative reading for anyone who wants to understand why a small number of cheeses are extraordinary."
— The Art of Eating

"This is the single most important book I've read this year. . . .There is, within the book, a history not only of cheese but also of mankind. As anyone involved in the wine industry knows, many of the changes in the last 100 years are coming full circle as modern generations realise that there is much to be learned from old ways. We've seen this full-circle pattern start to play out in winemaking virtually everywhere, where younger generations are embracing both the best of technology and the best of tradition. Francis and Bronwen Percival seem to see that too: that it is not about doing away with technology and reversing modernisation, but that it's possible to harness technology and tradition together and move forward to a better place.
— Tamlyn Currin,

"...if you are interested in artisan vs. commercial cheese production, microbes as fairy godmothers and evil witches, and raw milk vs. pasteurized milk, you’ll come away with a much more nuanced approach to all three topics."
— Wanderlust and Words

"From this book, one gains a real appreciation for the complexity, science, and artistry of cheese making."
— Choice
or
Buy Here
Copyright © 2020 American Booksellers Association